Last March, eight people – including six Asian women – were killed in a targeted hate crime in Atlanta, Georgia. In the year since, NBC News reports that 74% of Asian American Pacific Islander (AAPI) women have experienced racism or discrimination. Since the beginning of the pandemic, there has been a rise in hate crimes against Asian Americans and Pacific Islanders, mostly against Chinese-American women.

What these last few years of the pandemic have highlighted for me is how lucky I have been in my life so far to be relatively removed from discrimination and hate. I was born in China, but my parents immigrated to the U.S. when I was five years old so that my dad could get his Ph.D. at Purdue University. Even in the middle of Indiana in the early 90’s, I remember only one incident when I experienced obvious racism first hand (our car was keyed while we were out fishing). After my dad finished his Ph.D., our family moved to the San Francisco Bay Area where Asians are so integrated into the community that my high school was majority AAPI. In this environment, I never felt my race or gender was a hindrance.

When I fell in love with surgery, I didn’t think twice about being a woman in surgery, and I didn’t think of myself as a minority. I was lucky to match at UC San Francisco, where strong women leaders, including Dr. Nancy Ascher as chair and Dr. Linda Reilly as program director, had made women in surgery the standard. My graduating chief class of seven was made up of six women.

I hadn’t given much thought to the position of Asian women until the last few years when the turmoil of the pandemic exposed some of America’s most xenophobic sentiments. At the same time that Asians are making huge strides in America (Parasite won Best Picture at the Oscars, Boston elected an Asian American woman as Mayor), anti-Asian hate crimes increased 339% in 2021 with women being particularly targeted. All of this has made me appreciate the relative advantages I’ve enjoyed as an Asian woman before the pandemic, something not all minorities can claim. In a way, being Asian in America is like being a woman in surgery – we’ve been accepted as part of the in-crowd, but once in a while, we’re reminded that we’re still “other.”

As an aspiring surgeon-scientist, I often hear about being a “bridge-tender” – channeling knowledge from bench to bedside and back again. I think we as Asian Americans, the most prevalent and perhaps the most “accepted” minority in medicine, can also be bridge-tenders in a way—using our unique position to advocate for diversity. As in science, diversity breeds innovation and drives progress. Though we’ve come a long way, the last few years remind us there is still progress to be made. 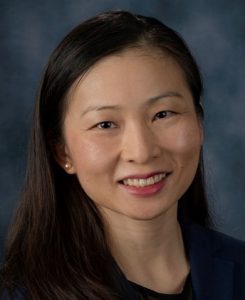 Lily S. Cheng, MD, is an Assistant Professor in Pediatric Surgery at Texas Children’s Hospital (Baylor College of Medicine) in Houston, Texas. She has an interest in congenital colorectal surgery and is currently working to improve the understanding and management of Hirschsprung disease. You can find her on Twitter @LilySCheng.