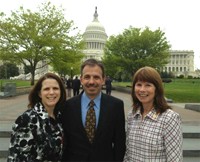 Happy Independence Day to our US readers! As a special holiday treat, today’s blog post features an article from our members-only newsletter: AWS Connections. Enjoy!

My Day on the Hill

In April 2013 I participated for the first time in one of the ACS Advocacy Summits in Washington, DC. Now I will admit, this was not something that was on my bucket list, but as a leader in the ACS, I was strongly encouraged to attend. In retrospect, I wish I would have started attending these summits years ago. Clearly the surgeons who had done this before were way more comfortable and polished in this role than I was. That being said, even if I was the only surgeon from my state there, I am confident the ACS Washington office would have prepared me well to fly solo.

After some prep work, reviewing the issues and with talks from some elected officials and their staff, we headed to Capitol Hill. What struck me initially was the sheer volume of U.S. citizens (usually in groups with nametags identifying the sponsoring organization) who were wandering the hallways of the Senate and Congressional office buildings with us. If we aren’t there presenting our concerns and viewpoints, our elected officials’ schedules will clearly be completely filled with other groups. Having not voted for several of the Utah delegation, it felt a bit weird visiting their offices. I had to remind myself that despite their party affiliation or who they defeated, these individuals (all men in the case of Utah) are now in Washington representing all of Utah, regardless of party. We had specific issues we were to review in each senator’s/congressman’s office. The Boston marathon bombings occurred the day before our visit, making funding for trauma systems an easy opening issue. From there we (my colleagues Dr. Amalia Cochran and Dr. Mark Savarise, both veterans in advocacy efforts) were able to cover a couple other issues. For each issue we had talking points and had made a plan about who was going to take the lead for each meeting. 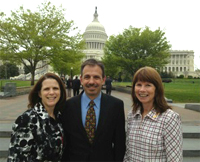 While we met with staff for the majority of the Utah senators and representatives, one of our senators was able to drop in at the end of the meeting and we were meeting with one of the representative’s chief-of-staff in his office when he came by to pick up the rest of his lunch. We were given important tips along the way, like asking the staff of one representative to take us on a tour and the staff of another to deliver us underground from one building to another.

Overall, it was a great experience, one that I hope becomes habit for me. We live in a great country, and should take advantage of the privileges that are afforded us by citizenship, which includes making our voices heard in a constructive manner to those who can make a difference on a national level.