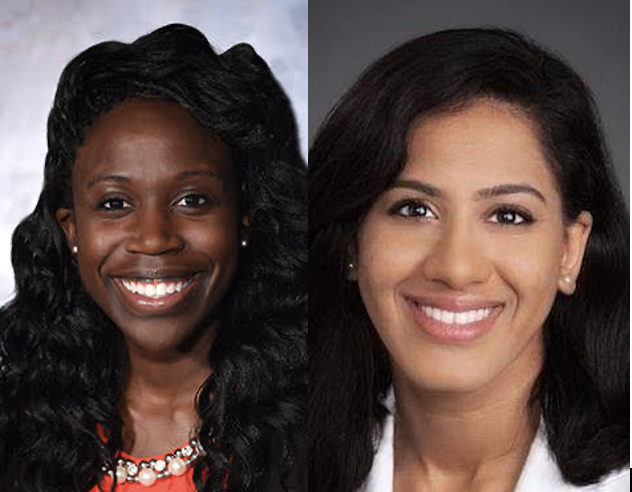 Vaidehi: Kamala was my paternal grandmother’s name. I never had the opportunity to meet her. The only picture I have ever seen of her is an oil portrait we have in my parents’ home. She died from an aggressive form of breast cancer when my dad was a child. She never saw him grow up, become the first in his family to get a doctorate, move to and struggle in another country, or build the life she could never have imagined in her wildest dreams. In the years after we emigrated to the United States in the early 1990s, we stayed in touch with family in India  through aerograms. The lightweight, pale-blue stationery was highly awaited before cell phones existed and when international calls were extremely expensive.

Victoria: Hattie was my maternal grandmother’s name. I never had the opportunity to meet her. There’s a photograph of her in my parent’s home, still pristine as the day it was taken. She died 6 months after being diagnosed with cervical cancer; she never saw my mother graduate college. She prided herself on making everything from scratch. Premixed shortcuts were never an option for her. She thought that the more she struggled, the less her children would. She loved my grandfather fiercely. Her mission was to support my grandfather and her children with her whole being and her ambition still courses through my veins.

When Kamala Harris was nominated to the Democratic ticket as Vice-President she became the first Black and Indian woman on the ticket of a national party in the US. Her entire life, as she describes it, was shaped by her first-generation background and a mother who taught her the skills to survive and succeed in a society that systematically oppresses women of color.

In 2018, Senator Harris wrote an Op-Ed in the New York Times about her mother’s battle with colon cancer and the silos and disparities that entrench our healthcare system. As she reminisced, she said, “Though I miss her every day, I carry her with me wherever I go. I think of the battles she fought, the values she taught me, her commitment to improve health care for us all. There is no title or honor on earth I’ll treasure more than to say I am Shyamala Gopalan Harris’s daughter. As I continue the battle for a better health care system, I do so in her name.”

Kamala Harris represents America as it could be. When Kamala said: “Dream with ambition. Lead with conviction, and see yourselves in a way that others will not simply because they haven’t seen it before, but know we will applaud you every step of the way,” she spoke to the little girls we once were, the women we are today, and the leaders we strive to be. She spoke to the women whose shoulders we stand on – Kamala Mujumdar, Hattie Bell, and the countless others we know by name and those who remain nameless.

We are two physicians and surgeons in-training. We are Ivy-league educated women,  immigrants and first generation Americans. One of us is the daughter of the African diaspora and the other born in India, raised all over the US. We are both American. Our intersecting and often conflicting identities matter imminently during this time in American history where we sit on the precipice of a country that slowly walks towards greater inclusivity and one that lives in fear of the supposed “other.”

When Senator Harris is sworn in as the Vice President of the United States, we know that for many Americans, we are seeing ourselves stand before the very systems of oppression, bigotry, and white privilege that have long been the cornerstones of this country.

Our immigrant families believe, in their bones, that moments like the election of Kamala Harris are possible in their chosen country.. To live with such hope in the same space as deep disappointment and fear is the resiliency that we know well. It is the space that women before us have occupied and passed on to their daughters – to us.

Vaidehi: I am Sunita Deshpande’s daughter.

As obstetrics and gynecology residents, we take care of women from birth to death. We are with them from the first view of that ever so desired yolk sac after a miscarriage to the hard family meeting, nowadays often by Zoom, as the pathology comes back as cancer. We care for these women with compassion and dignity despite how the world tries to strip them of it.

One Reply to “The Significance of Vice-President Elect Kamala Harris”