My newsfeed is punctuated by the screaming of anger, fear and rhetoric. An argument articulated in bursts of 140 characters. An argument that cannot be won.

The ebb and flow of the “conversation” about gun violence bubbles up every so often, every time there is a mass shooting event. We discuss how to prevent events like this, and trauma surgeons like me or others who work in emergency care bring up the same point: That this is not just a problem of mass shooting. This happens every day, across America, in an epidemic of gun violence. A public health problem that needs to be addressed as such, with money, research and resources.

I have worked in trauma centers in Detroit, St. Louis, Chicago and now Newark. Gritty, urban places where the tempo of gun violence is unrelenting and audible. Eight, 10, 12 gunshot victims a night is not uncommon, but not considered “mass” simply because more than one person pulled a trigger in different parts of town. The pager going off, every few minutes to hours. Each page is someone hurt, dying, or dead. My colleagues are right – that although mass shooting tragedies punctate our stream of consciousness, the more shocking numbers are in our daily experience with gun violence. So I could write another post, adding my voice to the choir of those who would point this out.

Instead, I want to write about the mothers of my patients. Nothing in my training could prepare me for the experience of talking to mothers in the waiting room, or for how that would change when I became a mother myself. And no matter how numb I get to the violence I see in the emergency room, I never get numb to family conversation that follows in the waiting room after a long operation.

I always make sure to change my scrubs so that they don’t see their baby’s blood on me while I speak. Their eyes are first worried, with furrowed brows, that relax when I say, “we are done with surgery, and he is alive.” But deeper worry returns when I give more detail. “He needed 20 units of blood.” “We left her belly open, and she will need more surgery.” “He is paralyzed.” “She will have a long hospitalization and is at risk for many bad complications.” “He is not out of the woods yet.” I imagine, that while I speak, they are not thinking of the man or woman lying on the operating room table, but instead are remembering an infant in their arms. The unthinkable joy of the first time they held their baby, so great they thought their heart might explode. Followed by first steps, first words, first days of school. Lives of hope, joy and potential, forever changed in their trajectory by a split second and the pull of a trigger. No matter how old the patient, that was someone’s baby once, and when that baby was born, that mother wanted what every mother wants: the best for their child. Now that child is unconscious, filled with tubes and holes.

Sometimes the conversation is shorter. “We tried everything we could, but his injuries were not survivable. We tried and tried, but his heart stopped and he has died.” The end of a story that started with unthinkable joy, just 2 floors up in L and D a few short years ago that ended today in the stark fluorescent light of the trauma bay. Nothing left now but the deafening silence of a period placed on the last sentence of the last page of that story.

I don’t know what the answer is to the epidemic of gun violence in this country. But I do know that talking to mothers over and over again is exhausting in a way that stays with you long after the day has passed.  These problems will not be solved by hyperbole and rhetoric spouted out in 140 character lines. Nobody wins these arguments. There are two extremes here: one side that wants complete gun control, the likes of which we see in Europe and Japan, which isn’t going to happen in this country, as a matter of culture, precedent, and law.  The other extreme advocates for unfettered access and ability to carry any weapon of their choosing, which we know leads to the arming of dangerous people as collateral. As long as the two extreme sides of this argument, refuse to bend their stance, or even talk about a way to meet in the middle, we will continue to emotionally elevate this argument and will never come to a resolution.

What we can do is bend, listen, discuss, and most importantly, study this problem.   Work together to find meaningful solutions supported by the intersection of data and common sense. We can slow this problem down, stop the unrelenting pace of gunshot victims so trauma surgeons like myself don’t have to look into the eyes of these mothers hour after hour, day by day, year after year. 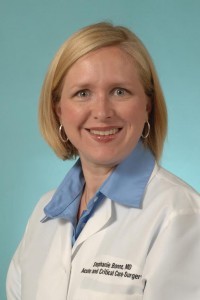 Dr. Bonne is a board-certified general surgeon with additional training and certification in Surgical Critical Care.  Her clinical interests are in trauma and injury prevention, trauma epidemiology, and infections in the surgical intensive care unit.  She participates in the American College of Surgeons, the Eastern Association for the Surgery of Trauma, and the Society of Critical Care Medicine. She leads the American Medical Women’s Association Gun Violence Prevention Task Force.  Dr. Bonne is the current Communications Chair for the AWS, and also serves as the faculty advisor for the Rutgers New Jersey Medical School chapter.  She is a wife and mother to three young children.

3 Replies to “A persistent beat: motherhood and urban gun violence”