Halfway through fourth year of medical school, my mother became acutely ill and was eventually diagnosed with a chronic condition. She was initially hesitant to seek medical care, attributing her symptoms to longer work hours leading to a delay in her diagnosis. Many times I wondered why she delayed seeking medical care, finally concluding that my mother had fallen victim to the common barriers many Hispanics face when accessing healthcare. These barriers include lack of health insurance, immigration status, language and cultural barriers to name a few.

Immigration status is also a barrier to seeking services and obtaining health insurance coverage. It limits access and discourages seeking services. Public health assistance programs for low-income families such as Medicaid and the State Children’s Health Insurance Program (SCHIP) are not available to undocumented families. Furthermore, those same programs are often times unavailable to newly naturalized families or may jeopardize their ability to apply for citizenship2.

Language also plays a major component in access to healthcare. I can remember watching countless times when my mother did not understand the question being asked and the provider struggle to understand her answer. Some Hispanic patients are not fluent in English or would be more comfortable discussing health issues in their primary language. Many fear discrimination because of their accent. The inability to communicate well with their doctor also prevents patients from understanding health care information.

Lastly, Cultural beliefs contribute to the how, when, and where Hispanic seek medical care. Growing up in El Salvador, I recall eating fresh Papaya for breakfast to prevent and even treat GI worms. Even after immigrating to the U.S. my mother would seek home remedies for common ailments such as using oregano for stomachaches and chamomile tea for menstrual cramps. Depression, anxiety and other mental health problems are rarely mentioned due to the associated taboo with mental illness.

By now, you may be wondering what you can do to help facilitate the care of your Hispanic or other minority patients. I encourage you to be cognizant of cost when dealing with this and any patient population. Many patients cannot afford testing and/or imaging. Ask yourself, “How will this test change my management?” In addition, look for ways to minimize prescription drug cost: prescribe generics-NPH insulin is cheaper than brand-name insulin, for example. If you suspect there may be a language barrier, ask your patient if they would like a translator, most hospitals have translator phone services available free of cost to the patient. Provide them with information in their preferred language and ensure they are able to read. Lastly, engage patients in their care. Ask if they would agree to take a prescription medication, don’t assume that prescribing ensures compliance and provide safe alternatives when possible. 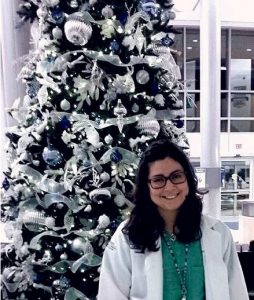 Madeline B. Torres, M.D. is a general surgery resident at the Penn State Milton S. Hershey Medical Center in Hershey, PA. She  will start a research fellowship in surgical oncology the National Cancer Institute (NCI) this summer.

Dr. Torres was born and raised in El Salvador and immigrated to the United States with her mother and brother at the age of nine. She then went on to obtain her B.S. in chemistry from the University of Colorado at Denver and earned her MD from the University of Utah School of Medicine. She became involved with AWS during medical school after working with AWS members Amalia Cochran M.D. and Leigh Neumayer M.D. whom she considers mentors.

Her interests include surgical education, surgical oncology, work-life balance and encouraging women and minorities to pursue surgery and other careers in medicine.