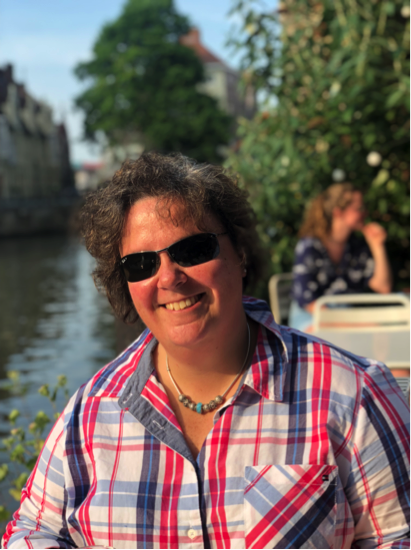 The AWS blog is thrilled to recognize the experience and accomplishments of women surgeons around the world.  While women surgeons share many common experiences, we differ in our cultural norms, support for women in careers and expectations of women in society around the world.  One of the goals of AWS is to support women internationally, and part of that recognition is to build cultural understanding and awareness of the barriers women face in countries outside the United States.

We would like to congratulate Dr. Spinoit on her incredible accomplishment – recently becoming the first female professor of surgery in Belgium, and hope to see increasing numbers of women rising through academic and clinical ranks into leadership worldwide.

I was born in a family where medicine, and especially surgery, was always present.  Many family members are surgeons or perform medical-related jobs. As far back as I can remember, I told my parents I wanted to be a doctor.  Many kids have a phase where they dream about being an astronaut, a firefighter, surgeon… My childhood dream never changed; I wanted to be a doctor like my grandfather and my uncle.

They told me many times that it would not be easy, especially for a girl.  It would be much easier to learn a job where I could have a more flexible schedule, where at least I would not have to work at night or during the week-ends.

Yet, I kept on with my dream, year after year.  In high school, I had great difficulty with chemistry, mathematics and physics.  Many people told me that, given those subjects were essential for medicine, I’d better let go of my dream.

However, I persisted, and I was accepted into and began medical school.  And indeed, chemistry, physics, and those other subjects I still do not really see the utility for in medicine, became my nightmare.  I was close to abandoning medical school a few times because I kept having bad scores in some classes in which the content was totally irrelevant to the daily clinical practice I have now.   Each time I was close to abandoning, I remembered what my grandfather told me, “If it’s your dream to become a doctor, you should do everything you can to make your dreams come true.  Never quit before you have done all you could. Never quit because you think it is too difficult for you.  Only quit when you’ve tried the hardest you can, as for that there is no shame.”

In those difficult moments, everyone needs to find his or her own way to overcome them.  For me, it was with the help of Cher and Chumbawamba; I took a break and danced until exhaustion while listening to “Strong Enough” followed by “Thubtumping”.  Only those two. I danced until I was physically exhausted, sweating, and needed a shower. After that, I was ready to begin working again.

Today, I am a Professor of Urology in one of the largest University Hospitals in Belgium.  I was very lucky to have family and friends who helped me become who I am today. I know they were very proud of me when I was appointed Professor, thereby becoming the first female professor in Urology in Belgium.  I still sometimes need my two theme songs, as surgery never gets easy.

The way to surgery is not easy for anyone, but gender biases make it even more difficult.  The fact that it took until 2018 to have a female professor in Urology in Belgium is the best example.  In many ways, Belgium is recognized as an open-minded country. Belgium was indeed the second country in the world (after the Netherlands) to legalize gay marriage in 2003.    But still, many women in Belgium and in the rest of the world are struggling to build their way in surgery. And I have an important message for all those young women going through those struggles; remember, “You’re strong Enough”.  “I get knocked down. But I get up again. And you’re never gonna keep me down.”

Anne-Françoise Spinoit’s fields of interest are congenital penile malformations and urogenital reconstruction in children, adolescents and adults. She has successfully defended a PhD thesis about it.  She has developed the pediatric robotic program in Ghent University hospital, and is one of the European pioneers in robotic surgery in pediatric urology.