It was another night in the SICU: 5:30 pm sign out, resident rounds, and dinner. As usual, I’d go into Mr. X’s room to examine him and make small talk with his wife but tonight she was not there.  Mr. X was a 55-year-old otherwise healthy man who came in as trauma patient after a motor vehicle crash. His hospital course had been  complicated by multiple surgeries, cardiac arrests, renal failure, and eventually a debilitating stroke. That night, he was in his usual state: with sluggish pupils that would respond to verbal stimuli and a slight movement of his left upper extremity.

At around 10 PM, his nurse called me to evaluate him as his pupils were no longer reactive and his strength had decreased. I was scared and preoccupied, something was off and I did not know what it was. I also knew that he would likely not survive  another stroke. We scanned his brain but found nothing to explain his change. At midnight, I received another call from the same nurse, this time his blood pressure was dropping. I quickly walked to his bedside, ordered a full set of labs and gave him fluids, followed by fresh frozen plasma. Despite our best efforts, he coded, the third time during his hospital course. Ten minutes of CPR and 2 pressors later, we stabilized him and called his wife to come in. As we waited for his wife to arrive, another trauma arrived at our emergency room, pulling everyone else away and, leaving me to deliver the bad news to Mr. X’s wife.

As soon as she saw him, she broke into tears and I couldn’t help but shed some tears myself. I collected my thoughts, took a deep breath and proceeded to tell her a succinct recollection of the events of the last few hours. She continued to cry, sobbing inconsolably; I stood there speechless, there were no words or gestures I knew that could provide comfort.

Shortly after, we called the chaplain and attempted a conversation about  “what would your husband’s wishes be…” It was not an easy question to ask and it was one that brought on more tears. The more I talked, the more she cried.

My last words were “I’m sorry.” I’m sorry for not being able to do more for your husband and even worse, for not knowing what to say. The next few minutes brought silence with intermittent sobbing as we all sat around Mr. Xs bedside. His daughters held his hand while his wife interspersed  “I have to let go” in between her cries. As I sat there in silence, I saw the man they knew: a husband, a father, a friend and a companion. The silence was comforting because during that time there was nothing except Mr. X and his family; there was no pressure to make medical decisions, no pressure to let him go. The attending returned to continue this difficult end-of-life care conversation. I don’t remember what was said or discussed; all I know is when I returned two days later Mr. X was gone. The night he coded, his family and I found comfort in silence.

As I finish my intern year, I think back to the night Mr X. coded and think of all the words I said and the ones I did not know how to find or say to comfort his family,  but the silence we shared provided comfort if only for a few seconds. I encourage readers to try and share a moment of silence with their patients, allow time for news and events to sink it. Most importantly, be part of that silence and know that when we have nothing else to say there is comfort in silence. 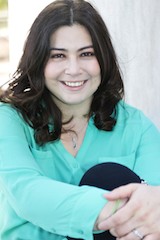 Madeline B. Torres, M.D. is a general surgery resident at Penn State Milton S. Hershey Medical Center in Hershey, PA. She was born and raised in El Salvador, moved to the U.S. at the age of 9 years. She obtained her Bachelor of Science in Chemistry at the University of Colorado at Denver  and her M.D. from the University of Utah School of Medicine. She enjoys movies, walks with her dog and the outdoors.

One Reply to “Finding Comfort in Silence”