News channels have been flooded with images of the devastation caused by hurricane María in Puerto Rico. There are numerous stories about the damages to the health system, infrastructure and economy of the Island. Yet, have you wondered what it was like for Puerto Ricans who experienced this devastating storm? I am a medical student from Puerto Rico and this is my story.

It was 4:00am and I was wide awake for the fourth day in a row. My mind filled with despair as images of the beautiful island I call home  were replaced with destruction. I made another frantic attempt to call them one more time. No success. Calling my loved ones had become a stubborn attempt to restore some normalcy in my life and to re-establish a sense of balance, to pretend this disaster never happened.

I was completing surgical “away rotations” in mainland US when on September 20, 2017, my life changed completely. Hurricane Maria, a category V storm plowed through Puerto Rico causing massive destruction. The delicate power and communications systems in the Island could not withstand the harsh winds and collapsed. Puerto Rico became silent and dark during the aftermath, and I watched in horror from afar as images of the Island showed my home in a state of destruction. I saw buildings collapse and families lose their homes. Places that were all too familiar to me become unrecognizable. The green scenery that characterizes the Isla del Encanto was substituted by murky brown as trees were stripped of their leaves and mud replaced grass.

In the midst of all this destruction I could not communicate with my loves ones to know if they were safe. I kept calling frantically in an effort to somehow get a response from their phones. When I finally heard their voice in the answering machine,  I was transported back to a state of calm and completeness, and for a split second I forgot that it had been more than 4 days without knowing if they were safe.

While I am safe in the continental US, the destruction of my home breaks my heart while I watch all that I know be torn to the ground. I watch in horror as supplies begin to dwindle and basic needs such as water become scarce. In the midst of all this uncertainty, all I have from my loved ones is silence… no familiar voices, no reassurance. There is no worse feeling of helplessness than knowing that your loved ones are going through the worse moment in their lives and you can’t help. There is no greater sorrow than the uncertainty of not knowing what is needed by those you love in moments of disaster.

As I  undergo this painful process of uncertainty for the future of my home and those I love, I suddenly become more aware of others’ misfortunes. Suddenly the cystectomy patient in room 1425 becomes the mother of two who is struggling with depression. I begin to develop a greater sense of what is needed from me as student and I begin to focus my energy on helping patients recuperate. I follow their progress as if they were my own family members, I speak with them as if I was speaking to those I miss dearly back home. They open up their greatest fears and concerns as I also share my own. During the time I spent without being able to confirm the wellbeing of my loved ones I was able to witness hope being restored in the life of a cancer patient who underwent major surgery and the devotion of loved ones during her challenging moments. This terrible experience taught me that sorrow unites people and that we can make a positive impact in the lives of patients despite our own personal struggles.

I  learned that a good stress relief technique was practicing my hand ties. When I felt the sense of despair taking over me, surgeon hand ties helped my mind focus on a different activity and refocused my energy on the task at hand. I devoted my time and energy to learning as much as I could, to keep my mind occupied. I was having excellent days in the operating room and great interactions with my patients, yet at night I stayed up and cried.  My mind was ridden with guilt, with being too tired to answer those late night calls, for being “too busy” to call and hear my family’s voice when I had the chance. The pain of knowing that once I returned home, it wouldn’t be the same beautiful place that I was born and raised in was truly devastating.

The Aftermath of Maria

When I finally heard from my loved ones their words were almost as painful as their silence. “We love you and we miss you, but don’t come back.” They went on to tell me how essentials like food and water had become scarce, how they had to spend the whole day in line for gas, how banks were limiting the amount of cash given per family, how overwhelming the darkness was at night and how difficult (if not impossible) it was to fly out of Puerto Rico after the hurricane. I heard that my best friend’s family lost their house after the hurricane, how supermarkets were empty, patients in the critical care unit were dying due to lack of electricity, and all these things seemed surreal to me. It almost felt like I left Puerto Rico in 2017 and was going to return to an island that was now in the 1900s.

Maria was called the fifth strongest storm to hit the United States and its landfall was described by Jeff Weber, a meteorologist from the National Center for Atmospheric Research, “as if a 50-to 60-mile- wide tornado raged across Puerto Rico, like a buzz saw”. If hurricane Maria was rough, the aftermath has been even more devastating. There were parts of Puerto Rico that saw 30 inches of rain in one day, the equivalent of the amount Houston received over three days during hurricane Harvey. A total of 48 people died during the storm and the death tolls continue to rise exponentially as power and water continue to dwindle.

One month after hurricane Maria, more than one-third of Puerto Rico households (about one million people) still lack running water. This has caused communities to search for water at local streams and water wells exposing themselves to water-borne diseases such as Leptospirosis. At least seventy six cases of suspected Leptospirosis and two confirmed deaths have been reported by Dr. Carmen Deseda, state epidemiologist of Puerto Rico.

Meanwhile, hospitals are currently operating with back-up generators. Roughly three million Puerto Ricans still lack power because less than 20% of Puerto Rico’s power grid has been restored. Photos have surfaced of surgeons operating with cellphones as flashlights due to sudden malfunctions with the hospital generators.

Communications continue to be challenging within and outside the Island as seventy five percent of cell phone antennas are still down. There are people still living in their houses without a roof fearing that they won’t receive the help they need if they abandon their homes. Physicians have had to discharge patients knowing that they will probably live on the street because they lost all of their belongings. As I learned more and more about the devastation and the aftermath of Maria, my desire to serve has become stronger and deeper.

After undergoing some of the worst moments in my life I am convinced that this has made me a stronger person and better surgical residency candidate. Now I know I have the resilience and the dedication to overcome any challenges thrown at me during my surgical training.

We have a long road to recovery but this experience has allowed us to remember we have the strength needed to overcome the challenges we are facing as a country. Our hearts are torn for the loss, the devastation, the catastrophe that is going on in our island. We encourage you to help us rebuild our country by supporting local organizations in Puerto Rico and by joining relief groups.

We will never forget that fateful week of September 20, 2017 and it will inevitably change the history of our island forever but I am optimistic that together we can restore the health of the Island. As a medical student trained in Puerto Rico during this critical time in our history, it will likely take time to emotionally recover from this experience, but I am confident that it has helped me become more sensitive, empathic, and more dedicated to my future patients. After all, like my brother said the first time I spoke with him after the hurricane, “después de la tormenta sale el sol (the sun will always come out after the storm).” For now, I keep my head up high and continue carrying my suitcase from one airport to another as I travel for interviews hoping for the light at the end of the tunnel, not only for me but for all of those back home who are suffering. 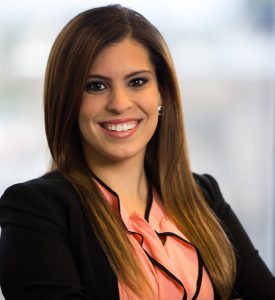 Mariela R. Martinez Rivera is fourth year medical student at Ponce Health Sciences University (PHSU) in the city of Ponce, located in southern Puerto Rico. During her medical training, Mariela has become a recipient of the American Medical Association (AMA) Minority Scholar Award and has been inducted as Junior Member of the Alpha Omega Alpha and Gold Humanism Honor Society for her commitment to serve communities in Puerto Rico. She studied Biology at University of Puerto Rico Mayaguez where she conducted research in Genetics and Admixture of the Puerto Rican population. Mariela then completed a Masters Degree in Human Genetics at the University of California-Los Angeles where she received the prestigious Eugene Cota Robles Fellowship and the NSF Graduate Research Fellowship.

Her interests include urology, oncology, surgery, health disparities, health advocacy, non-profit leadership, genetics and molecular biology. A native from Puerto Rico, Mariela has spearheaded diverse initiatives to increase leadership and advocacy among Latinos throughout her involvement in the Latino Medical Student Association. She is also passionate about increasing the representation of women in medicine and in surgical fields.

She enjoys painting, photography, and singing. Mariela also loves going to the beach and spending time with her family.