Prior to medical school, I considered myself athletic but never a runner. I could not run more than a few miles without an overwhelming sense of discouragement. When I began medical school in 2013, I found myself surrounded by individuals that had been running most of their lives. It was inspiring that people were able to juggle the demands of school and still properly train for a half or full marathon. Before long, I had set my first goal of running a half marathon. This race took place during my second year of medical school, which for me was the most academically challenging year with USMLE Step 1 looming in the distance.

I was lucky to have a group of classmates that became my running buddies. We called ourselves the “wolf pack”, meeting after studying to run on the local river path. I found that training runs were always easier to complete with a group of friends. It is this companionship that keeps you going when you have a double-digit training run to accomplish. After several weeks of training, I ran the A-Mountain Half Marathon in Tucson, Arizona. This scenic trek around Tucson also takes you up a small mountain at about mile 6, which at the time was less than enjoyable, but once up the mountain you gain great panoramic views of the city. After completing the race, I distinctly remember thinking to myself, “Well, that was horrible. Maybe running isn’t for me”. Hours later, I was texting my running group to plan our next half marathon. That is the thing about running – no matter how difficult a race is, it always has a way of bringing you back in to go for another.

Over the next two years of medical school, I completed six half marathons in various locations across the United States. Some of my friends and I even traveled to San Francisco for the Nike Women’s Half Marathon, which awards each finisher with a Tiffany’s necklace – a prize I still cherish today (Image 1). At first, my goal was to get through each race, yet I found myself gaining a certain level of competitiveness with myself. This led to me signing up for my first full marathon – the Nashville Rock n’ Roll Marathon. Not only is this hilly race known for the great live music along the course, it was also conveniently at the very end of my fourth year of medical school. With up to three months off during the end of fourth year, I knew I would have the time and dedication needed to properly train for running 26.2 miles. 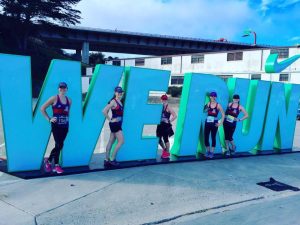 Among all things, having a realistic training schedule might be the most important. I used a Hal Higdon (http://halhigdon.com) novice running schedule, which I found to set weekly goals that I could accomplish. I also learned that it is okay if you miss a run; after all it’s a marathon not a sprint. It is the work you put in over the course of several months that matters, not days. One thing I did prioritize was my weekly long runs. I strategically placed those runs on days I had off, knowing it would take several hours out of my day.

I also relied on my wolf pack during these long runs; an 18-mile training run didn’t seem possible without the support of friends. Each long run was harder than the last, but you learn how to emotionally outrun the joint pain and mental exhaustion you experience, knowing that it is making you just that much better in the end.

Soon after the flurry of Match Day and a post-match vacation, April 29th was here. I traveled to Nashville alongside some of my closest friends from medical school. Arriving at race day was invigorating and terrifying. The forecast for the run was 90 degrees with 70% humidity, which are conditions that even for someone from Arizona found brutal to run in. The first half of the race was about as expected. Running several half marathons gets you conditioned to become comfortable with this distance and type of race. It is the last 13.1 miles that I experienced a whirlwind of emotions. I went through feeling like I can finish the race to thinking I had made a massive mistake signing up for this. This is where running really becomes a mental game, which I found similar to some of the mental struggles I faced during medical school. What really got me through the race was walking when I needed to. Finishing a marathon doesn’t mean you need to run the entire race – in fact regular walking breaks can bring you to the finish line at nearly the same time as if you had run the entire race, typically with fewer injuries and pain. The feeling of crossing the finish line is a feeling you will never forget, because at that moment you are officially a marathoner (Image 2). 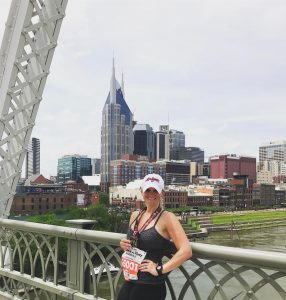 While I initially would have never imagined myself finishing a marathon, I learned a lot about myself through this process. First, I can accomplish much more than I thought I could. Having a goal is the first step. Second, having an outlet from a busy, stressful life in medicine is healthy and necessary. Even though running takes a great deal of time out of my week to train, the rewards to my physical and mental health are well worth it in the end. Last, it is ok to not be so hard on myself. Taking a week break from running if I need to, walking if I need to – we all have different paths to get to the same place.

Image 2: After finishing my first marathon in Nashville!

Hilary McCrary is the Chair of the AWS Medical Student Committee and is a fourth year medical student at the University of Arizona College of Medicine – Tucson. She will begin her Otolaryngology – Head and Neck Surgery training at the University of Utah this summer. She hopes to practice in an academic setting where she can operate, teach, and conduct research. hcrees@email.arizona.edu