By Marissa A. Boeck

When #ILookLikeASurgeon went viral in August 2015, many expected a short lived hashtag. Yet Dr. Caprice Greenberg, the president of the Association for Academic Surgery (AAS), has shown the conversation on diversity, inclusion, and equity in surgery is far from over. During the recent AAS and Society of University Surgeons (SUS) 12th annual conference in Las Vegas, Nevada around 2,000 medical students, residents, fellows, and attendings gathered to network, mentor, collaborate, and discuss academic surgery. Despite the abundance of stiff competition, the AAS Presidential Address “Sticky Floors and Glass Ceilings” by Dr. Greenberg stole the show.

All those packed into the large event hall immediately knew the focus: women in surgery. This subject continues to be pertinent and necessary to discuss despite many notable advances, such as both the current and incoming presidents of the AAS and SUS being female. Yet Dr. Greenberg steered the conversation away from traditional topics of “women in surgery” as she asked us to rethink what issues actual female surgeons face. She argued the challenges do not boil down to only those associated with parenting. This is especially true since 40.5% of female surgeons do not have children, while 91.8% of male surgeons do, which is why we need to talk about parental challenges and leave versus simply maternity. She then spoke about widespread biases and discriminations against women seen throughout society that also resonate in medicine and surgery, using the Audi #DriveProgess 2017 Super Bowl ad, Huffington Post Pinksourcing video, and The Daily Show’s American Soccer’s Gender Wage Gap video as poignant examples. She showed data from a study of academic science faculty exemplifying hiring gender biases for lab managers based solely on applicant names.

Dr. Greenberg then honed in on specific items most relevant to surgeons: differences in salaries, promotions, and grant funding. The fact that in 2017, based solely on gender, with all other factors held equal or superior in females, women still earn less, fill fewer leadership roles, and have lower grant funding than men is unacceptable.

The impact of Dr. Greenberg’s talk was palpable. From individual goosebumps and frequent murmurs, to occasional outbursts of disbelief and, finally, tears. No one in the room appeared unaffected, women and men alike. An objective measure could be visualized on social media, where metrics for the conference hashtag showed a large spike of almost 750 tweets during the 45-minute talk, greatly overshadowing the other subjects of the day (Figure 1). The diversity-championing hashtag #ILookLikeASurgeon showed a similar increase during the same period (Figure 2), disseminating Dr. Greenberg’s important message to a global community that has likely faced similar challenges in their careers.

Besides firing everyone up for action, the most important part of Dr. Greenberg’s talk was the discussion of potential solutions. The global social media community agreed, as this appeared to be the most shared slide from a quick glance of the Twitter feed. Her suggested systemic interventions for surgery included:

Only through the wide adoption of targeted actions that aim to recognize and address surgical workforce inequities, such as those listed above, can we actually hope to erase them. This includes organizations speaking up, such as the Association of Women Surgeons’ Statement on Gender Equality. Although frequently labeled as women in surgery problems, these issues cast a wider net, encompassing all those affected by implicit bias; in other words, potentially anyone. Yet together we can make surgery a field that accepts and promotes anybody who has the passion, stamina, and drive to succeed within a challenging but rewarding profession, irrespective of personal characteristics that have no bearing on one’s potential or worth. 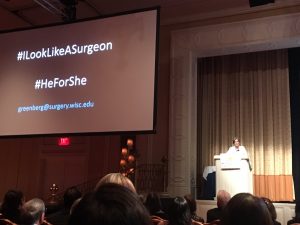 Dr. Greenberg’s final slide starkly projected #ILookLikeASurgeon and #HeForShe in large white font on a black background, inviting the audience to continue the conversation, both on social media and in real life, until we all receive equal compensation and consideration for opportunities for professional and personal success. 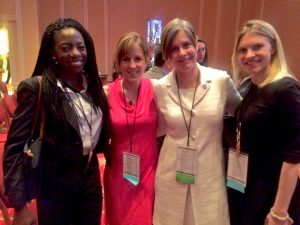 Resources:
2017 AAS Presidential Address By Dr. Caprice Greenberg, Introduction by Dr. Rebecca Sippel
Ladies Get Paid (@ladiesgetpaid) – Helping women advocate for themselves to get recognized and rewarded
He For She (@HeforShe) – United Nations Women’s mission for gender equality
Why So Slow? The Advancement of Women by Virginia Valian
Carnes, Devine, Baier Manwell, Byars-Winston, et al. “The Effect of an Intervention to Break the Gender Bias Habit for Faculty at One Institution: A Cluster Randomized, Controlled Trial.” Academic Medicine 2015; 90(2): 221-230. Link

Marissa A. Boeck MD, MPH is a general surgery resident at New York Presbyterian Hospital – Columbia. She is passionate about diversity in the surgical workforce, the power of social media in medicine, and global public health, especially as it relates to injury prevention, emergency response, and trauma and surgical system strengthening in low-resource settings.

2 Replies to “The Greenberg Spike: How speaking out on implicit bias and gender equity in surgery continues to trend”