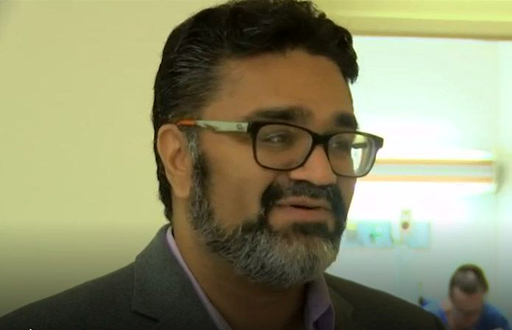 By Gopika SenthilKumar and Jamesa Fabien

Dr. Anil Paramesh is a US citizen who was born in Detroit. He grew up there for eight years, after which his family moved back to India. He has numerous family members who are physicians and was exposed to medical specialties from a young age; this inspired him to pursue surgery. He says “this was because of the “quick-fix” mindset, where a surgeon sees a sick patient in the ER and is able to fix them immediately in the OR. The results of this “quick fix” become evident immediately. I also loved the experience of being in the OR right from the start.”

He pursued the rest of his education, including his graduate medical training in India, and returned to the US for surgical residency. When asked if he considered returning to the US for medical school, he shares, “I did consider returning to the US for med school, but some of this was cost prohibitive. It is actually a cheaper option to come directly for residency.” His mentors and advisors suggested that he complete his medical school in India as well. Dr. Paramesh, however, was always set on coming back to the US for his surgical residency. “I believe the residency training here is much more standardized to a higher level, and I wanted the best training I could get. “

The most challenging part of his story was that he was considered a foreigner in both countries. “In India, I was considered a foreign student because I was American. So, I was never allowed to sit on any government entrance exams because I was not an Indian citizen. I had to get my visa renewed to stay in India every year. I remember this one episode when I was in the middle of the final exam season, and I forgot to renew my visa. I actually had the police show up to the medical school to arrest and deport me! It took a lot of frantic phone calls to let me stay. On the flip side, I had to struggle when I returned to the US, as I was now an IMG. As you may know, residency spots are much harder for IMGs, especially in surgery. So, it seems I had challenges in my education on both sides. I still scold my dad about his decisions on this!”

Having numerous family members in the US was invaluable for Dr.Paramesh when he moved back here for residency. He says, “it helped make the transition back to the US easier. While I was making the interview rounds pre-residency, I was able to work in several doctor’s offices to give me some experience as well.” Nonetheless, he says that the journey to residency in the US was quite challenging. He does believe that the opportunities for IMGs have improved since his residency years. “IMGs are better prepared now for a residency in the US, than during my era. Many foreign medical schools allow for international rotations in the US, compared to a few decades ago. This makes it much easier for IMGs to have a true sense of what residency in the US entails, and better prepares them for this. I wish I had this opportunity when I was a med student, as medicine is practiced very differently in different countries.”

He advises the future generations of IMGs to “be humble, and never give up trying to learn, no matter how trivial it may seem. Some of the best advice I have been given as a resident was from junior medical students, nurses, and other allied staff. A resident may be proud that they have passed medical school and have a lot of medical knowledge, but the best residents are those that are efficient. And efficiency comes from knowing the ins and outs of a hospital system. And that inside knowledge comes from those that have worked there longer than you (nurses, staff, etc.). So, take advice to heart when you are given it. You will be so much better for it.”

Anil Paramesh, MD, MBA, FACS is a Professor of Surgery, Urology, and Pediatrics at the Tulane University School of Medicine and serves as the Surgical Director for Kidney/Pancreas and Living Donor Transplantation. Dr. Paramesh completed his medical school at the Kasturba Medical College in Mangalore, India. Following this, he completed his General Surgery residency at the North Oakland Medical Centers/Wayne State University in Michigan.  From there, he went on to complete a Multiorgan Abdominal Transplant Fellowship at the Mount Sinai School of Medicine in New York City.  He then went on to obtain his MBA at the Tulane University Freeman School of Business, with a focus on Strategic Management. He currently performs liver, pancreas, and kidney transplantation in both adult and pediatric patients.  He also performs hepatobiliary surgery, living organ donation, and dialysis access.

Dr. Paramesh has numerous publications and presentations at national and international meetings. He serves/has served as the national Medical Advisor for the Association of Organ Procurement Organizations (AOPO), Medical/Tissue Director of the Louisiana Organ Procurement Agency, Director for the Louisiana Chapter of the National Kidney Foundation Board, and transplant advisor for the ESRD Network 13 Medical Review Board. He serves/has served on several regional and national committees for transplant organizations, including the United Network of Organ Sharing (UNOS) Committee on Minority Affairs, the American Society of Transplant Surgeons (ASTS) Standards Committee, and the ASTS Legislative/Regulatory Committees (which he currently chairs).

Dr. Paramesh has extensive experience in healthcare education. He currently trains medical students, residents, and fellows in surgery and organ transplantation. At the Tulane University School of Medicine, he serves as the Associate Clerkship Director in Surgery for medical students, and he helps create the curriculum for medical student and resident education.  He organizes extramural educational courses/simulations for healthcare professionals. He is the recipient of several teaching awards for these efforts and holds scholarships to help him to do this.