Like most surgical residents, I used to think of social media as an easy way to connect with friends, to discover interesting articles, and a way to occupy my hands during the (few) idle moments of my day. Whether it was scrolling through Instagram while waiting for an elevator or checking out articles on Facebook before I fell asleep at night, social media was just a casual time filler. Over the past year, however, social media has played an increasingly important role in my professional world. Shortly after I had my daughter in October, one of my attendings added me to a secret group on Facebook for surgeon mothers. The group is an offshoot of a hugely popular community that many of you may have heard about- the Physician Moms Group, which now has over 60,000 members. As Dr. Stephanie Bonne described in her blog post last week, these communities have created a (semi) protected space where physician and surgeon mothers can go to vent, seek advice, share tips and find other amusing and useful information about navigating life as a physician/surgeon mother.

At first I was just a lurker in these groups, casually scanning through pages and posts while I was up nursing my daughter in the middle of the night. But as my maternity leave drew to a close, my anxieties about returning to the operating room loomed large. Pumping at work and in between cases seemed overwhelming if not impossible. The idea of being away from my daughter for twelve or more hours a day made me want to bawl. But suddenly I had found a group of women who had done it.

These women had not only survived but appeared to have built happy families despite the demands of being surgeon. So I reached out. I sent a few Facebook messages and posted asking for tips on breastfeeding while in surgical residency. Within minutes, multiple women had written back to me and shared their stories. A resident from another program in Boston sent me her number and we bonded for over an hour about surgery, residency, motherhood, and the juggling act it takes to manage it all. She assured me that there would be days when I would miss my daughter so much that I would question my career choice. She also assured me that a few weeks back into residency I would find a new normal — that making it home to give my daughter her bath and put her to bed would feel like a little victory, just enough to keep me going. We comforted each other by reminding ourselves that residency is temporary and one day we would have a modicum of control over our schedules. Suddenly, the whole endeavor seemed not only possible but manageable.

With this new community at my fingertips, I became motivated to get involved with the AWS and signed up to join the Communications Committee led by Dr. Stephanie Bonne and Dr. Heather Yeo. I co-hosted a mixer at my home for women medical students interested in surgery. When some of the students asked me how I was managing the transition back to residency with an infant at home, I was brutally honest. I was scared, overwhelmed and knew that the first few weeks away from my daughter would probably be torture. Now, almost three months into PGY-4, there are definitely days that I ache for the long, lazy days I spent with my daughter on maternity leave. When cases run late and I come home after she’s already asleep, I feel defeated. I open up Instagram and feel sorry for myself when I see posts from the “mom friends” I made on maternity leave. Many of them have more flexible jobs where they can take off days during the week. I’m overcome with “FOMO” (fear of missing out) when I see posts of them at the Boston Children’s museum or the sprinkler playground on a sunny day. given everything I’m missing out on at home, social media can sometimes make me question whether the path I’ve chosen is really worth it .

But then I dream of the woman I hope my daughter will become some day. I know that I must lead by example if I want her to believe that she can set ambitious goals for herself and follow through with them. When I’m reaching hour 80 of my week and the fatigue makes me doubt my choices, I open up our Facebook group and look at pictures of all the women surgeons who have come before me. Surely if they can do it, I can do it too. These women are posting tips for passing the boards, the best shoes or music to have in the OR, or even just sharing little successes from their day. In this community I have found a small tribe of women who have walked in my clogs. While there are great women role models at my residency, somehow this online community feels more accessible.

Our hope on the AWS communications committee is to create another group  where all women surgeons and trainees, not just mothers, can come to find friendship, advice, support, and even a daily dose of humor from like-minded women across the country.. Be on the lookout on our Facebook page in the next month or two. If you have interest  in joining our group, you can also reach out to me on Facebook, Instagram or Twitter (@cornelialg for Instagram and Twitter). I look forward to connecting with many of you! 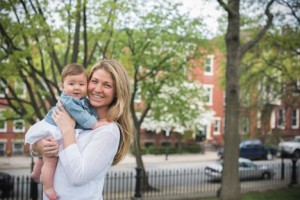 Cornelia Griggs, MD is a PGY-4 General Surgery resident at the Massachusetts General Hospital (MGH) in Boston, MA. She completed a surgical critical care fellowship at MGH from 2014-2015.