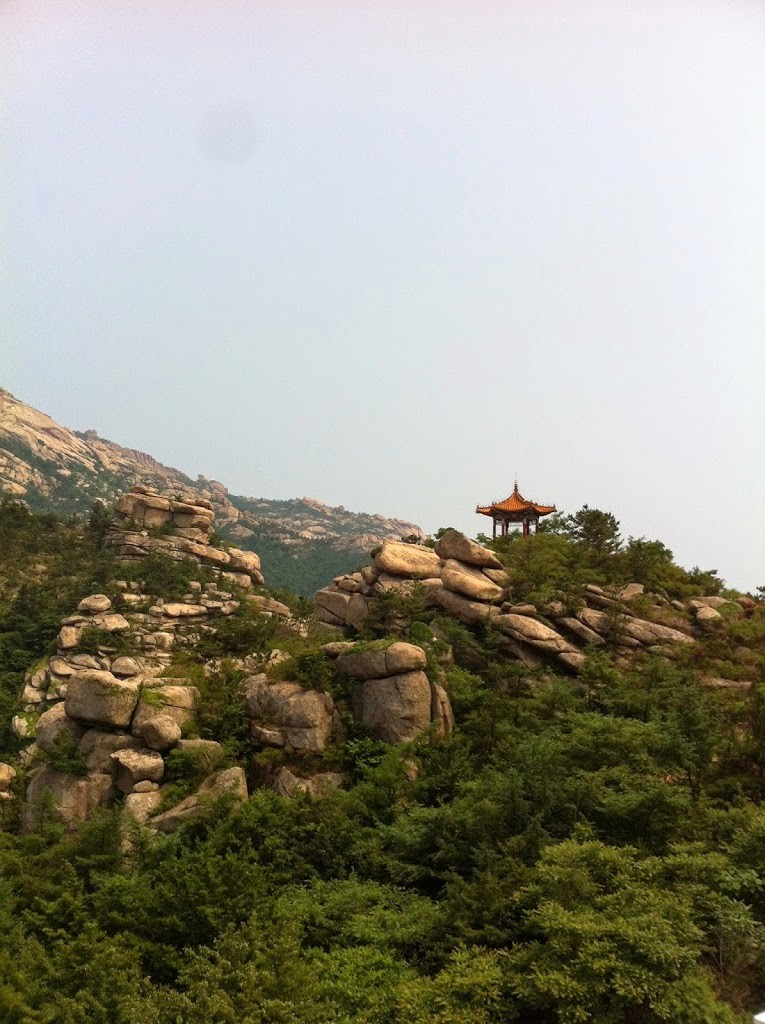 In April 2014 I spent a month with the Department of Surgery at the Affiliated Hospital of Qingdao University – Huangdao Branch. It was a marvelous experience, and I was asked to share a snapshot of my time there.

Qingdao, which means Green Island, is a major coastal city of approximately three million people in the Shandong province of China. The city boasts the world’s longest sea bridge, Tsingtao Brewery, and Lao Mountain. Reminders of its time period under German colonization in the 1800s remain visible in Qingdao’s wide streets and architecture.

The Field Hospital of Germany first opened its doors on the shore of the Yellow Sea in 1898. As Qingdao modernized and grew, the Field Hospital transformed into the Affiliated Hospital of Qingdao University. Today, there are three hospital branches that provide patient care to all of Qingdao and its surrounding areas. The vast majority of my time was spent at Huangdao Hospital, the newest branch, located a 40 minute drive outside the heart of Qingdao.

During the week, my mornings started with morning report at seven o’clock, with rounds following shortly after. The rest of the day would be spent in the operating theatre. Cases usually began around nine o’clock, with the occasional earlier start time. Rooms turned over quickly, and it was not unusual for the team to schedule multiple gastrectomys and low anterior resections each day (the department of general surgery was colorectal heavy). Elective cases took place through the weekend, but I used my Saturdays and Sundays to attend local conferences, visit a community health clinic, and observe other services, such as emergency medicine, critical care, neonatology, pediatric surgery, and hepatobiliary surgery.

I learned an incredible amount during my month in China. I was given multiple opportunities to see surgery practiced differently, more cost-efficiently, and most importantly, without detriment to the patient, which made me pause, take mental notes, and ask why on a frequent basis. Take laparoscopic appendectomies for example. In the US, the cost of appendectomies including hospital stay, conservatively speaking, can quickly add up to a bill of $30K. In China, the cost is approximately 3200 RMB, which if converted to US dollars would be less than $1K. Same disease process, same step-by-step operation, but a drastic reduction in cost.

There were plenty of other differences that I found intriguing. One of them was the observation that the hospital did not stock scrub brushes by the sinks. Instead, faculty and staff prior to each case will rinse once with a chlorhexidine solution, dry off with nonsterile paper napkins, and then Avagard. The rationale for eliminating scrub brushes is that the constant scrubbing leads to skin abrasion, increasing the risk of bacterial growth. On the other hand, if the epidermis stays smooth and intact, anything other than normal skin flora is unlikely to grow. The hospital infection control team has been swabbing the hands of random operating room personnel monthly and growing the samples for culture, but so far nothing beyond typical skin flora has grown.

Another observation led to the realization that I have been spoiled by the scrub nurses back at home. In the operating rooms at Huangdao Hospital, everyone with the exception of the attending was expected to gown and glove themselves. Also, every effort was made to conserve and reuse. Gowns, needles, and even the laps used to soak up the betadine solution used to prep the patient were recycled through the system for future use. Face masks and caps are rationed out to those entering the operating rooms by a nurse who stood guard outside the locker rooms.

An additional fascinating discovery was in learning which types of cases were considered too risky for residents to perform independently and which were not. Residents were given exceptional autonomy in performing upper gastrointestinal and colorectal cases, but if a patient needed a gallbladder out due to symptomatic cholelithiasis or choledocholithiasis, attendings and chief residents were the only ones allowed to manipulate the biliary tract during laparoscopic cholecystectomies. The most action junior residents could hope for was to drive the camera. They were shocked when I gave them examples of the types of cases US residents at their similar level were allowed to perform.

Catching a close-up glimpse of a different training structure gave me some added perspective into what mine would soon be in the US. Given the controversy in the states regarding how work hour restrictions have led to an increase in hand-off errors, it was of particular interest to me as a soon-to-be intern to see what life without work hour restrictions looked like. The residents lived in or around the hospital–most unmarried or living separately from their partners and children. Their attention was channeled 100% into become better surgeons each and every day, which showed. The residents in Huangdao were technical wizards in the operating room. They were able to dissect their way into the correct plane in seconds, without a single wasted movement. No bleeder or atypical anatomy fazed them. They knew all the patients front-to-back. Many of my mentors in the US have spoken to me of what surgery was like in the good ol’ days without work-hour restrictions. Being in China gave me a glimpse into their past, and it was awe-inducing.

The thing is, the past is almost always seen through rose-colored lenses, and after the initial rosiness died down a bit, I started to better understand the rationale for why residency training in the US has undergone such tremendous changes, even if the changes have resulted in their own challenges. The residents at Huangdao Hospital had little time to stay up-to-date with the literature, spend time strengthening family ties, or maintain interest in meaningful outside hobbies. It was not unusual for residents with families to take the bus into the city to visit wife and child for half a day, spend the other six days of the week in the hospital, and then send as much of their income as possible home to help pay the bills. The residents were at the beck and call of the hospital and their department around the clock. It was only by their good fortune that they had a Chair known throughout the hospital for his fairness and kindness.

I spent a significant amount of time with the Chair of Surgery discussing the differences I noted between residency training in the US and at Huangdao Hospital. He was particularly interested in the way training was standardized from program to program, so I told him that, in US teaching hospitals, each specialty is usually represented by one or more services, each composed of a mix of junior and senior residents and headed by an attending. During rounds, the senior resident comes up with a plan for each patient based on the clinical presentation, touches base with the attending for any changes he or she wants to make, and then the junior residents see to it that the final versions of the plan are carried out. By having residents rotate through different services, each with a standardized hierarchy, the residents can gain similar opportunities for graded responsibility throughout their training. By the time residents graduate, they are expected to have received comparable training, regardless of where they completed their residency. Another upside to the US model of training, I told the Chair, was that by minimizing the micro-managing, attendings can devote more of their nonclinical time to research, teaching, or other administrative tasks. The Chair of Surgery was so enthusiastic about what I shared with him that within days he had morning rounds changed, and as far as I know, they are still being conducted via the revised approach.

My conversations with the Chair of Surgery were rewarding. I was able to pick his brain on how to become a better leader based on his own his triumphs and tribulations, and he had an opportunity to learn new methods by which he could try to improve the quality of his residents’ training. Our conversations were numerous, but one particularly meaningful impact I made didn’t require me to make any fancy speeches. My mere presence was enough because it caused people to talk. By April, I had already found out that I would be at the University at Buffalo, the State University of New York for my next half decade of general surgery training. Women pursuing surgery in China is a once in a blue moon phenomenon—essentially unheard of. They were shocked and impressed to find out that I was one of multiple women in my class at the University of Texas Medical School at Houston who matched into a surgical specialty for residency. One circulating nurse rushed home that evening to share the news with her daughter. It was mind-boggling to see the people around me attempt to grasp the concept of a woman not only pursuing surgery but also having that accepted as normal within society. I could see the beginnings of a paradigm shift taking place in many of their minds.

There are so many more remarks I can make about my experience abroad. The 60-70% 5-year survival rate for patients diagnosed with resectable gastric adenocarcinoma at Huangdao Hospital compared to the dismal 30% in the US. The occasional traveler or expatriate who spoke English. The sick patient who still appreciated whatever counseling I provided in my broken Mandarin. The Chinese government’s firewall of social media platforms like Blogger, WordPress, Facebook, Youtube, and Twitter that allow real-time communication to take place, now so heartily embraced by our surgical community. The pay-for-service approach. The paternalism. The around-the-clock walk-in clinic. The heavy reliance on radiographic imaging. The lack of tort reform or Good Samaritan laws. The lateral rigidity in career transfer. The integral role played by family in the perioperative management of patients. There are some aspects of surgery in China that have my utmost admiration, others nothing but frustration. But that goes for most things in life.

My observations are all anecdotal and limited by my experience being predominantly at only one hospital. I can hardly say if the hospital where I rotated is representative of other hospitals in China or even Asia. That being so, I have had such an expansion of my worldview that I would not have had otherwise, and my undergraduate medical education has benefited tremendously.

I would never have had this opportunity without the mentorship and sponsorship of Dr. Anil Kulkarni, whose recommendation of me to his friend and former colleague paved the way for me to establish my own special project to rotate in China. Dr. Yun Lu, the Chair of Surgery at the Affiliated Hospital of Qingdao University, Huangdao Branch has invited me to return, and I definitely plan to take him up on his offer. Eventually I would like to bring other students along with me to show them how amazing of a profession surgery is, and what a comfort it is to know how quickly and easily it can be for a surgeon or aspiring surgeon to feel at home in any country simply by walking into an operating room.

Have you ever completed a surgical rotation in a country different from your own? If so, what was that experience like? Share in the comments below. Jane Zhao is a general surgery resident at the University at Buffalo, the State University of New York. She obtained her medical degree with a scholarly concentration in Clinical Quality, Safety, and Evidence-based Medicine from the University of Texas Medical School at Houston and completed her undergraduate studies in Medicine, Health, & Society at Vanderbilt University. She was the 2012 recipient of the Shohrae Hajibashi Memorial Leadership Award and chaired the AWS Blog Subcommittee from 2013 to 2014. Her interests include healthcare social media, quality improvement, and public health. She can be followed on Twitter.

One Reply to “My International Surgery Elective”