In spite of the tragic bomb explosion that occurred in Bangkok days before the start of the 2015 World Congress of Surgery (WCS), the conference took place as planned. The Congress was officially opened on Sunday, August 23rd by Professor Dr. Her Royal Highness Princess Cholabhorn Mahidol, founding President of the Chulabhorn Research Institute, and the youngest daughter of the King and Queen of Thailand. 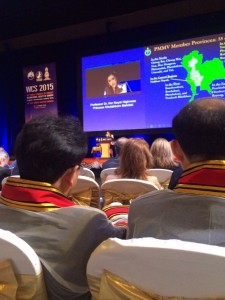 As a qualified scientist, HRH has attached the greatest importance to the role of science in social and economic development, and originally conceived the idea of creating a national institute to assist in the development of Thailand. Princess Chulabhorn graduated in 1979 from the Kasetsart University with a Bachelor of Science and first class honors and received her doctorate from Mahidol University in 1985. She was awarded the UNESCO Einstein Medal for her efforts in promoting scientific collaboration in 1986 and was the first Asian to be invited to join the Royal Society of Chemistry in the United Kingdom as an Honorary Fellow.

Her Royal Highness suffers from SLE, but despite her poor health delivered a fascinating one hour lecture on “The Princess Mother’s Medical Volunteer Foundation: The Blueprint of Surgical Care for All.”

During the opening ceremony, surgical leaders were presented with a coin to commemorate the occasion; AWS was represented on this occasion by past president Dr. Danielle Walsh. Later in the evening our AWS Founder Dr. Patricia Numann was admitted to Honorary Fellowship in the Royal College of Surgeons of Thailand.  Amongst her numerous past distinctions, Dr. Numann is a past president of both the American College of Surgeons and the International Surgical Society US Chapter. For more than a decade she has hosted meetings for women surgeons in South Africa, Canada, Australia and Japan. In 2011, she was presented with the International Surgical Society Prize in recognition of the guidance, mentorship and inspiration she has provided to overseas surgeons both in practice and in training for four decades. 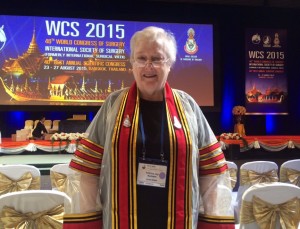 The U.S. Chapter of the ISS sponsors the Nyhus Traveling Fellowship, which allows a young US surgeon to attend the World Congress of Surgery. The surgeon must be a U.S. citizen, in training or within their first five years of practicing within the U.S. The Chapter provides up to $2500 towards the young surgeon’s travel and accommodation expenses and ISS waives the registration fees. The 2015 Lloyd Nyhus Traveling Fellowship was awarded to Dr. Stephanie Chao. Dr. Chao received her undergraduate degree in Biological Sciences from Stanford University, where she graduated with honors, distinction and Phi Beta Kappa. Dr. Chao attended medical school at the University of California San Francisco and completed her General Surgery Residency training, as well as her Pediatric Surgery Fellowship at Stanford University. Her research interests include improving hepatitis B and liver cancer prevention and control. Dr. Chao conceptualized the Jade Ribbon Campaign, which has become the global emblem for hepatitis B awareness and also founded “Hep B Moms”, a non-profit organization dedicated to reducing mother-to-child transmission of hepatitis B. Her work has been supported by numerous agencies including the Centers for Disease Control and Prevention. Dr. Chao has served on the Board of Directors of the National Resident Matching Program, as well as on Advisory Committees for the California Viral Hepatitis Clinical Task Force, the Immunization Action Coalition Birth Dose Project, and the US Congress Viral Hepatitis and Liver Cancer Prevention Control Act. Dr. Chao has received the Samuel L. Kountz Humanitarian Award and was the 2012 recipient of the Association of Women Surgeon’s Hilary Sanfey Outstanding Resident Award. Dr. Chao is now Assistant Professor of Pediatric Surgery at Stanford. Dr. Chao spoke during the AWS session and gave two oral papers at the WOPAFS session. 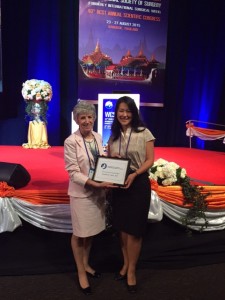 Dr. Chao was presented with her award by Dr. Hilary Sanfey, President of the US-ISS Chapter

On Monday evening with the local assistance of Dr. Prinya Sakiyalak, Dr. Patricia Numann arranged a visit, with museum tour and dinner, to The Jim Thompson House (https://en.wikipedia.org/wiki/Jim_Thompson_House). Most importantly, we had the opportunity to shop at a discount! Transportation was kindly arranged by Dr. Peenutchanee “Bea” Chartiburus, MD, who is Chief of Cardiac Surgery Unit in the Department of Surgery, Rajavithi Hospital, Bangkok. 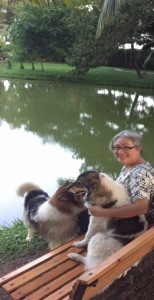 Bea with two of her dogs 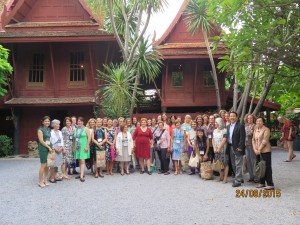 Almost 50 people from nine countries attended the event.
While most were surgeons we were also joined by several of our anesthesiology colleagues.

On Tuesday morning we had a very enjoyable networking breakfast hosted by AWS and the ISS – US Chapter. Once again we had a large, international attendance. Women represented Thailand, Canada, Taiwan, Japan, South Africa, Slovenia, UK, Australia, Malaysia, Sweden and Myanmar in addition to the USA. On a more somber note Dr. Nancy Perrier offred a moving tribute to both Dr. Eva Singletary and Dr. Teresa Flippo-Morton who died earlier this year. 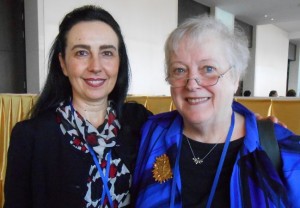 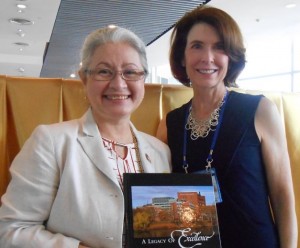 Dr. Chartiburus is holding a special gift from Mount Auburn Hospital in Cambridge, Massachusetts where the King of Thailand Bhumibol Adulyadej, also known as Rama IX, was born in 1927. The book gives the history of the hospital and has pictures of the Thai Royal Family. The King is the only monarch born on US soil, is revered by the Thai people and is the longest reigning monarch in the world.

On an academic note AWS sponsored three panel sessions , including one session co-sponsored with ASAP (Alliance for Surgery & Anaesthesia Presence). The first session on the “Woman Doctor and the Patient” was particularly emotional as speakers highlighted challenges in their environment, and provoked a lot of discussion and opportunity for future collaboration. The second session entitled Professional Development for Women Surgeons was equally well attended.

The third session co-sponsored by ASAP was entitled “Women in the Global Surgical Arena.”

For further information on becoming an ISS member, click here.

One Reply to “2015 World Congress of Surgery: Bangkok”