My latinidad in the context of pursuing a surgical subspecialty has made me both invisible and hyper-visible. As a Latina in an operating room with a thousand moving pieces, from ancillary staff turning-over a room in under 30 minutes, scrub technicians meticulously following the surgery anticipating the next instrument, to nurses ensuring the patients are safe and comfortable, I was often identified as one of these healthcare workers. I take pride in knowing that I share some of the same qualities as them; efficiency, attention to detail, and empathy. Still, it is often a surprise to many when I introduce myself as the medical student on the team. The hyper-visibility is accompanied by my continuous effort to ensure I know all the equipment,  anatomy, steps, complications, follow-up treatments, to know it all. If I don’t, I will not have represented Latinas and women in medicine well. Although the onus does not and should not lie on one individual to represent this vast heterogeneous group of people, this can make a nick at the 2.4% of Latina women physicians currently in the United States, with even fewer of us specializing in surgery as seen in the work by Dr. Romero that showed <100 Latina surgeons across academic surgery faculty.

Currently, the United States population is made up of 18.7% Hispanic/Latinx folks and this number is projected to rise to 28% by 2060. This alone is a call to action to increase Underrepresented in Medicine (URiM) physicians and trainees for increased race-concordant relationships, which have been shown to improve healthcare outcomes, reduce health disparities, and provide much needed care to under-resourced areas. It is important to maintain this at the forefront as Latinx communities are heterogeneous and vast and include Black, Indigenous, White, and other races within this ethnic group and can deeply affect Latinx and other under-resourced communities. Increasing the representation of URiM in surgery would help in addressing health disparities specific to surgical and surgical social responsibility care including the effects of food insecurity on surgery, and connections between primary language and surgical outcomes, surgical complications, and readmission rates.

As a recipient of the Association of Women Surgeons (AWS) and Latino Surgical Society (LSS) Diversity, Equity and Inclusion (DEI) Award in 2021, I had the privilege of attending the AWS “Celebrating our Past, Transforming our Future” conference, where I was able to further learn about the arduous and fulfilling work that the AWS has done since its establishment to address the various stages in a woman’s surgical training. Organizations like the AWS in conjunction with the LSS have been supporting and propelling Latinx women trainees to form strong connections with others in the field, such as through the DEI Award. Through this award, I was also able to access vast networking opportunities through both the AWS and LSS, and gain mentors dedicated to the advancement of women in surgical subspecialties, such as Urology.

As Latinx Heritage Month comes to an end, I am encouraged by so many Latinx physicians and the growing number of Latinx surgeons who have come before me, served as possibility models, and have carved out paths for others to follow and build upon. Having the opportunity to be exposed to and participate in various pipeline programs and mentorship experiences, I understand the necessity of continuing cycles of mentorship to recruit and retain those who might be interested in surgical subspecialties. Through the support of organizations such as AWS and LSS I am empowered to continue addressing barriers to increasing representation in surgery, specifically Urology– from creating pipeline programs, increasing awards that help address systemic barriers specific to URiM students pursuing surgical subspecialties, and increasing opportunities for mentorship. The interplay between the invisibility and hyper-visibility that I along with many minoritized women pursuing surgery face nicks less as I continue to build community with other Latinas, women and allies within surgical specialties. 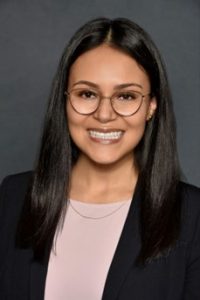 Natalia Garcia Peñaloza is a fourth year medical student at the David Geffen School of Medicine at UCLA and Charles R. Drew Medical Education Program. She was born and raised in Cochabamba, Bolivia and has made the San Fernando Valley her home since migrating to the United States. She attended San Francisco State University and earned a Bachelors of Science in Biology with a minor in Latino/a Studies. Natalia also earned a Master’s of Bioinformatics and Clinical Research at UCLA between her 3rd and 4th year of medical school. Through her clinical rotations she was exposed to Urology, where she found a home in medicine and is pursuing this amazing surgical subspecialty. One of her goals is to be a leader in providing and bridging urological care for all, regardless of insurance status, socioeconomic level, race or ethnicity. She intertwines her formal education with her lived experiences with an aim to increase parity of Under-Represented in Medicine to the US population and to address health inequities that often plague under-resourced communities.