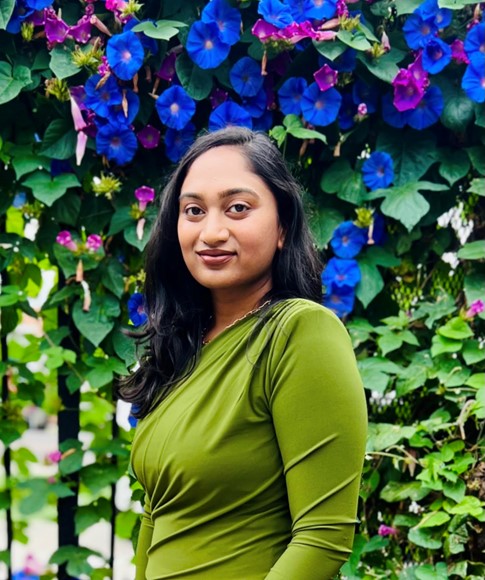 Earlier this year, I saw an opportunity to volunteer at the Association of Women Surgeons Highschool Outreach Event. I have never before come across a formal mentorship program for women high school students during my medical schooling in my home country, India. This made me curious, and I was very enthusiastic to get involved and contribute. The day consisted of impactful events, including guidance on crafting stories, speed mentoring, a suture workshop, and exposure for the high school students to some of the conference events, such as the Keynote Address and the Starr Medical Student and Resident Research Forum. 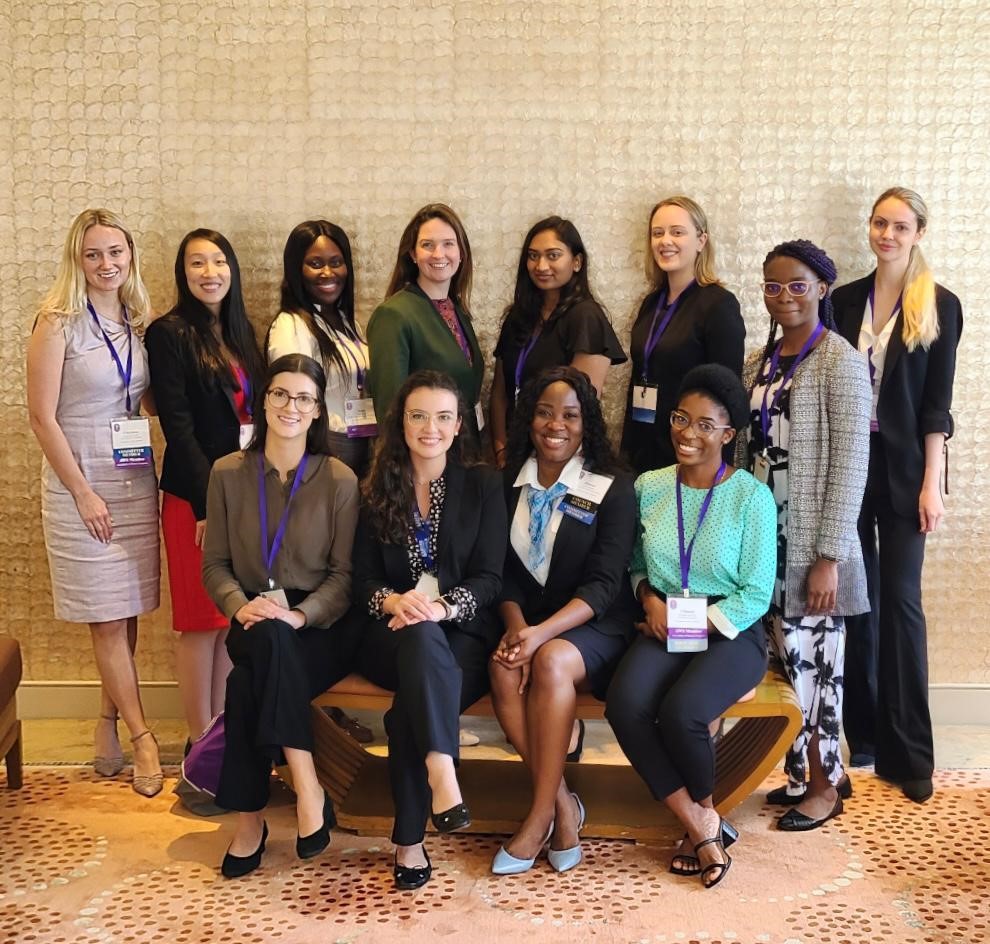 The crafting stories session was highly informative and offered one on one guidance to the students. Dr. T. Salewa Oseni, a prominent breast surgical oncologist at Massachusetts General Hospital, led the students through an engaging story about her path to medicine. She spoke of how she was sure about wanting to pursue medical school, and due to its exorbitant cost, she explored alternative ways of financing her education. During a recruiting session, a mentor explained to her about army scholarships for prospective medical students. She chose to join the Navy based on her love for travel. Approximately a decade later, she reflected saying her experience in the Navy established unparalleled discipline in her, which became advantageous during surgical training, and fostered wonderful friendships across the country, making the experience life-changing.

Dr. Gezzer Ortega spoke on the importance of how much one’s childhood experiences can influence their career paths. He proceeded to speak of how growing up, as a first-generation American, and the eldest child in the household, he helped his parents extensively when they faced a language barrier upon immigrating to the United States. These formative experiences paved the way for him to become substantially involved in medical research focused on improving language access and concordance for surgical patients. One of these endeavors includes his involvement in a study exploring if patient outcomes vary according to a hospital’s level of resources for interpretive services.

These experiences shared by stalwarts in DEI surgery were impactful not only to the high school students but also to me. It taught me the weight of how important it is for me to reflect back on my dichotomous life experience, being equally brought up in the United States and India. Oftentimes the causes we choose to become advocates for, and our field-developing contributions stem from difficult life experiences or tough decisions we made during our formative years.

After the insightful talks by Ms. Jamesa, Dr. Ortega, and Dr. Oseni, the high school students were given exercises to share their stories with the rest of us in the room. I had the privilege of listening to the story of a bright young woman regarding her experience with cerebral palsy and how she firmly chose not to hold it as a disadvantage in the way of her dreams. Yet, instead, used it to drive her to pursue medical education and training in neurosurgery. She spends a lot of her time learning about the marvels of the brain stemming from her curiosity about her condition. Gaining the opportunity to interact with highly motivated high school students reminded me of a valuable lesson as a woman medical student aspiring to pursue General Surgery. That there is always a way to flip what may traditionally appear to be a disadvantage as the very fuel behind the fire.

Later in the session, I was responsible for teaching simple interrupted suturing to female high school students. Personally, volunteering at this event was very fulfilling and enlightening. One 15-year-old young woman, a Varsity Volleyball player, had undergone a devastating knee injury. She spoke of knowing first-hand how a physical injury can affect an athlete psychologically. She felt she was best suited for a career in Orthopaedic Surgery. I felt immense satisfaction in being able to teach a surgical skill to a woman as young as her and with so much more direction than I had at that age.

The Impact of Early Mentorship Focus For Women

Ms. Yoshiko Iwai, a medical student at the University of North Carolina School of Medicine, presented her study on “The Impact of Demographic Resemblance on Specialty Selection and Experience” at the STARR Medical Student and Resident Research Forum. Her study found that women were less likely to meet self-resembling physicians at a young age. They concluded that efforts to improve workplace diversity may increase the likelihood of exposure to self-resembling physicians. This outreach event is a perfect example of how the Association of Women Surgeons is pioneering change in access to early mentorship opportunities for prospective women medical students. Events like this one have an added benefit in theoretically increasing the proportion of women matriculating into surgical residency, with the conclusions of Yoshiko’s study and of numerous other studies that exposure to same-sex mentorship  early on can be very effective in bridging the gender gap. Anecdotally, it was not until I was taken under the wings of Dr. Pavai, a highly revered woman Pediatric Surgeon in South India, that I had the confidence to accept Surgery as a career path for me.

Advocacy For Women In Surgery

Although there has been a rapid increase in women in Surgery in the United States in the past three decades, this does not instantly put all surgical trainees and aspirants on an equal playing ground. In addition, the proportion of women in Surgery has not increased to the same extent in lower and middle-income countries. For example, in India, women surgeons represent only 2.4-2.8% of all surgeons. Hence a mentorship focus on women pre-medical students and medical students can go a long way in bridging the gender gap among surgical trainees.

Dr. Arriana Gianakos founded a “SpeakUp Ortho” coalition and is actively striving to improve the culture of Orthopaedic Surgical training for women trainees by encouraging them to speak up about their experiences during training. She spoke passionately about her vision behind this initiative at the Women In Medicine Summit 2022. “During my Orthopedic Surgery training, I was introduced to a culture of hostility, experiencing bullying and sexual harassment. When I tried to stand up for myself, I faced severe retaliation. I realized that this was a systemic problem affecting many worldwide.” She has co-authored many peer reviewed manuscripts to bring forth solutions to the widespread problem of gender inequity in surgical training.

A study exploring gender disparities in awards given to surgical trainees found that female residents constituted only 31.4% of the award recipients and that female residents were overall 55.6% less likely to receive an award compared to male residents (statistically significant). The authors reflected that greater attention should be paid within residency training programs to gender disparities in award winners. Systemic gender biases can cause burnout, limit the future career potential of women surgical residents and discourage women from choosing a general surgical career. Beyond this, a Chinese medical student survey this year indicated that 53.19% of medical student respondents believed Surgery was not suitable for women. When approximately 50% of graduating medical students are women, if surgical specialties are to undergo significant development in the future, women medical students must perceive it to be a professionally satisfying career path.

The AWS Highschool outreach event was one of my first experiences in becoming an advocate for women in Surgery. My desire to become one stemmed from my primitive experiences as a first-year medical student in the anatomy lab when one of our mentors asked us what we wanted to specialize in. When my good friend said in response, “Cardiothoracic Surgery,” my professor said, “Why not Cardiology? Surgical specialities are difficult for women to pursue”. I, however, did not know how to take formal action towards advocacy for women in Surgery until I became extensively involved in women in surgery research, volunteered at the AWS Annual Conference, and sought mentorship from the leaders in the women empowerment space. In fact, research conducted on a similar mentorship event carried out earlier by the Association of Women Surgeons, found that after attending the pilot mentoring event, over 70% of the underrepresented minority high school students felt capable of becoming surgeons, and over 80% were interested in gaining mentorship. Women medical students often think their voices will go unheard in their pursuit of becoming advocates for women in Surgery. However, they have tremendous potential to join the discourse on gender inequity in Surgery and create substantial change.

Oviya Giri, MBBS, is an intern at the P.S.G. Institute of Medical Sciences and Research, India. She found her passion for surgery through her involvement in research related to pediatric pancreatic injury outcomes, congenital anomaly outcomes, and minimally invasive surgical outcomes. In addition, she trained for a competitive exam in Pediatric Surgery by shadowing and assisting the Pediatric Surgery team. Through that endeavor, she made strong relationships with her surgical mentors, giving her the confidence and desire to pursue specialty training in surgery.

Growing up, being considered a creative child by her parents, she sought to bring out her creativity in the field of medicine to create impactful change. She was initially told that creativity and medicine couldn’t go hand in hand. After gaining clinical mentorship from leading pediatric urologists in India, Dr. Pavai and Dr. Sen, she became aware of how reconstructive surgery epitomizes creativity in medicine through her exposure to surgeries such as phalloplasties for congenital aphallia, and urethral duplication repairs. She aspires to walk in the shoes of her mentors and carry on their legacy.

She has received awards and recognition for research presentations at local research forums and for her contribution to frontline work in the management of COVID-19 patients at P.S.G. Hospitals. In her time outside the hospital, she enjoys writing, making memes about her experiences in medical training, and watching comedy films.

She recently founded a blog titled “Loops and Loupes of Journeys,” a magnification into the lives of surgeons. Her blog’s mission is to tell stories of surgeons, from their struggles to the pinnacles of their careers. She hopes to become a strong advocate for women in surgery, develop her biographical writing skills and become an academic surgeon-scientist in the upcoming years. You can find her on twitter @OviyaGiri and on LinkedIn @OviyaGiri.