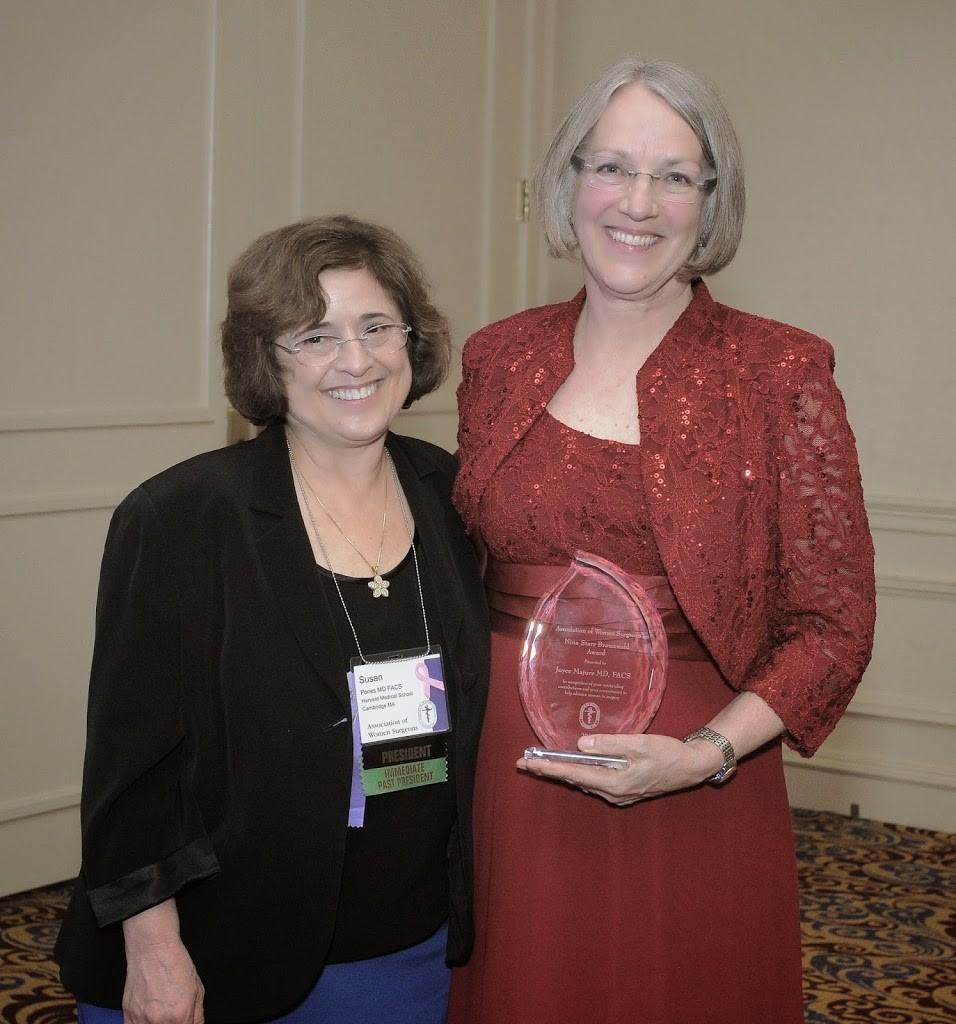 by: Susan Kaiser, MD, PhD, FACS
AWS Foundation Awards
Monday, October 7, 2013
Washington DC
The Nina Starr Braunwald Award (given first to Claude Organ MD in 1993), recognizing outstanding contributions to the advancement of women in surgery, was presented to Joyce Majure MD, a member of the AWS since its very first meeting in 1981, who practices general surgery in a small city in Idaho.  Dr. Majure produced the first AWS newsletter and created the Pocket Mentor, first published in 1993 and now in its fifth edition, initially designed to help women surgical residents who lacked female role models in their training programs. Dr. Majure herself has been a role model for generations of AWS members.
The 2013 Olga Jonasson Distinguished Member Award (given first to Christine Haycock MD in 1990 as the Distinguished Member Award), recognizing a member surgeon who exemplifies the ideals and mission of the AWS, was awarded to Hilary Sanfey MD, a transplant surgeon,Professor of Surgery and Vice Chair for Educational Affairs at Southern Illinois University.  Among her very significant contributions to and activities on behalf of the AWS, Dr. Sanfey founded our first local chapter.

The 2013 Past Presidents’ Honorary Member Award (given first to Judith Briles PhD in 1990 as the Honorary Member Award), for important activities in support of the mission and values of the AWS, was given to Marsha Moses PhD, a teacher and biochemist, Director of the Vascular Biology Program at Boston Children’s Hospital, and posthumously to Keith D. Amos MD, a beloved surgical oncologist and researcher at the University of North Carolina in Chapel Hill.

The 2013 Hilary Sanfey Outstanding Resident Award (given first to Janice Cormier MD in 1999), for a resident who demonstrates potential as a future leader in surgery, was awarded to Meera Kotagal MD of the University of Washington.
The Patricia Numann Medical Student Award (given first to Sudha Jayaraman in 2003), established to encourage and support female medical students pursuing a career in surgery, was awarded to Jamie Anderson of the University of California at San Diego.
Inspired by these award winners and their stories? Make a contribution to the AWS Foundation today. Please help us continue this wonderful tradition.
The AWS Foundation is currently accepting nominations for the 2014 Awards. Check out our website for more information and applications. Deadline to submit a nomination is July 14, 2014.