As a resident of Washington DC, I had a “front-row seat” to the Women’s March that took place on Saturday Jan 21, not just here in DC but in hundreds of cities around the country and the world. With humble grassroots origins, it has been billed as the largest one-day protest in U.S. history. It was an awesome display of solidarity and a tribute to the power of peaceful assembly in our democracy. 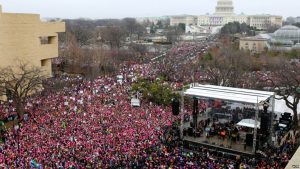 It is clear that many different concerns compelled women to participate in the March. While there are undoubtedly AWS members on both sides of divisive issues like abortion, immigration reform, gun control, and others, the core message of the march was one every woman should be able to get behind: equality, respect, and dignity for all women. Equal pay for equal work. Equality of opportunity. The right to be safe in own bodies, without the specter of sexual harassment in the workplace. For our daughters to live in a world free of sexual assault. As one woman put it, “things we thought we were done marching for, but apparently are not.”

The AWS tagline is Engage, Empower, Excel. The March certainly engaged an extraordinary number of women of all ages! While not all the protest signs were as polite as this one, my favorite was carried by a girl who looked to be about ten years old: “Girls with dreams become women with vision.” The overriding collective message of the march was: Women Count. We Matter. The visible and notably peaceful gathering of nearly half a million women in DC alone, many in pink knitted hats, cannot be ignored or dismissed. Women’s rights are civil rights. We will be vigilant. And as Margaret Mead put it, “Never doubt that a small group of thoughtful, committed citizens can change the world. Indeed, it’s the only thing that ever has.”

2 Replies to “Reflections on the Women’s March”