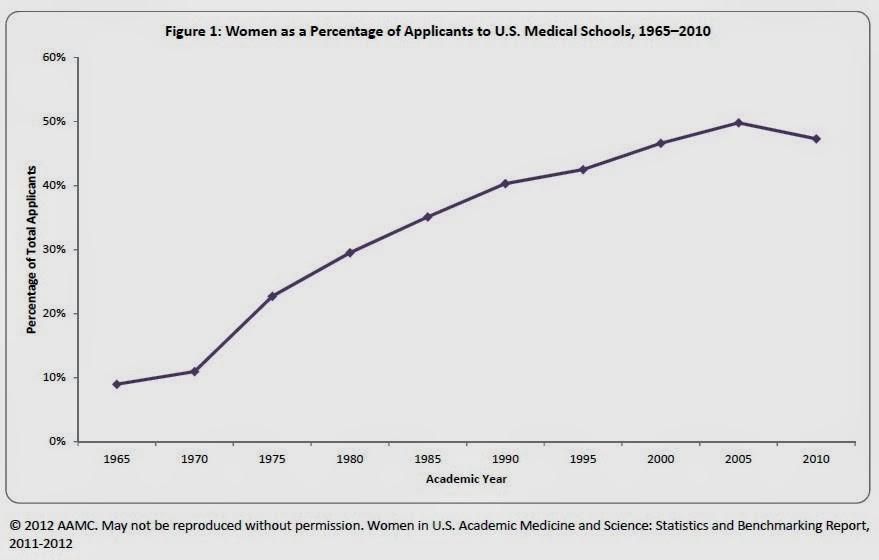 by Minerva A. Romero Arenas

We cannot all succeed if half of us are held back.

Elizabeth Blackwell, a teacher and immigrant to the U.S., turned to medicine after a friend confided on her deathbed that she would have been spared much suffering had her physician been a woman. She went on to become the first woman to earn the Medical Doctorate in the U.S. She was admitted as a prank by the all-male students on the faculty – who allowed the students to vote on Elizabeth’s admission never thinking they would allow a woman to become their peer. The face of medicine has changed significantly in the 160+ years since Dr. Blackwell graduated from Geneva Medical College (now Hobart and William Smith College/SUNY).

Women are pursuing medical careers in record-breaking numbers. Female applicants to medical schools went from less than 10% in 1965, to approximately 50% in 2005. In 2013, 48 schools had a female majority of the class.

The changes seen in medical schools, however, are not representative of the currently active physician workforce. Women make up less than one-third of all physicians, and only 15% of general surgeons, and 4-6% of neurosurgeons, urologists, and orthopedic surgeons. Data of gender representation in residency reflect similar trends. In 2011, nearly half of female residents were training in primary care (pediatrics, internal medicine, family medicine) and less than 10% in surgical specialties. 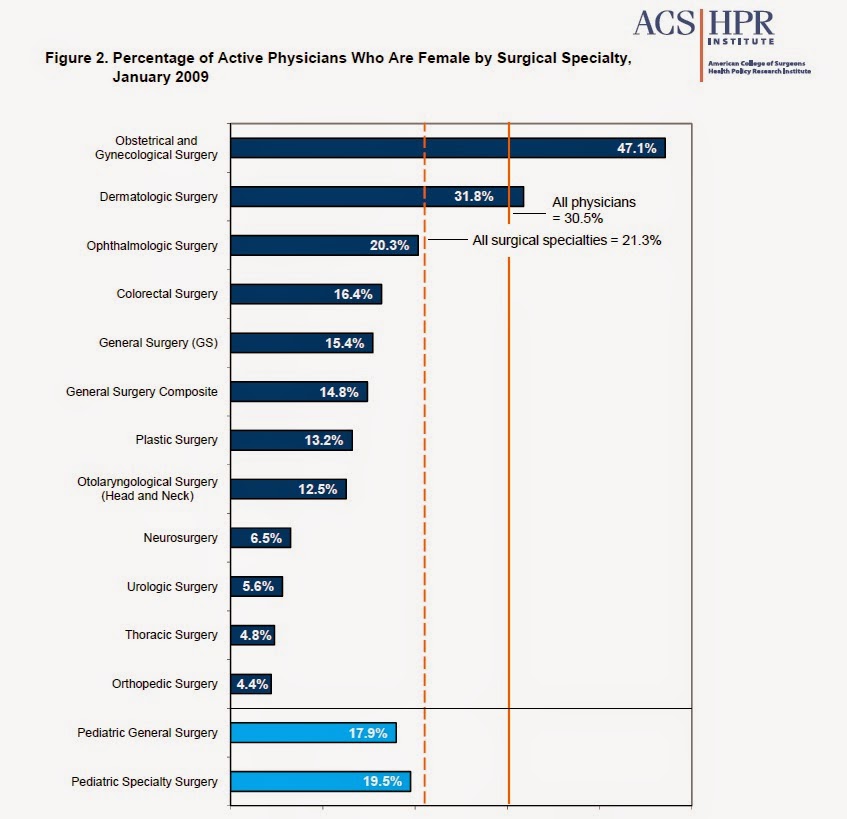 About 5 years ago, I was talking on the phone with one of my lifelong mentors when she asked me, “Minerva, why not?” I was unable to come up with an answer. I was nervous about a realization I had just a few weeks before: I loved surgery. I had just spent 2 months working long hours with excellent residents and surgeons. They had a great work ethic, were cool in the face of chaos, showed compassion toward their patients, and had a passion for their work that I had not seen in any other field. What should have been an exciting moment actually terrified me. Did I have what it takes to be a surgeon? And would it be worth making the sacrifices it would take for possibly 5-10 years of training?

Just days away from starting what we call “audition rotations” in the fourth year, switching to surgery was also a scheduling nightmare. I personally called the clerkship directors to apologize for a late cancellation. Thankfully, they were graceful and encouraged me to “figure it out,” even offering to allow me back later in the year if I ultimately decided against surgery.

It was not surprising that they were perhaps a bit skeptical of this decision. Surgery had crossed my mind during college, but fell off my list at some point in my first two years of medical school. I had planned to pursue a residency in internal medicine and eventually subspecialize in a field like medical oncology or infectious disease. These fields were friendly to women, and most importantly, I thought would help me merge my love of medicine and public health. Many of the mentors and role models I met were primary care physicians.

When I announced my interest in surgery, nobody hesitated at trying to save me/tell me why it was so hard – after all, surgery programs have one of the highest percentages of residents quitting training. “You won’t have a personal life.” “Do you want to have children?” “What does surgery have to do with public health?” The issue of lifestyle differences for surgeons is serious. In a 2009 study (the year I graduated medical school), women surgeons were less likely to have children and more likely to have their first child later in life. Male surgeons were more likely have a spouse who was the child’s primary caretaker. Reassuringly, 82% of women in that study would choose their profession again.

If I had a nickel, for every time I heard “but I never met a woman surgeon” maybe I would have paid off my student loans by now.

As a member of two key underrepresented groups in medicine (woman and Latina/Hispanic), I have felt the need to share my story with students who may have similar doubts about pursuing careers in medicine and surgery. I am involved in mentoring & leadership through several organizations (National Hispanic Medical Association, Latino Medical Student Association, Alliance in Mentorship, Tour for Diversity in Medicine, and Association of Women Surgeons). Many of the premedical and medical students I meet at mentoring events are surprised to meet a 1) surgeon, 2) woman surgeon, or 3) Latina surgeon. I was too when I met them in medical school.

In fact, many of my patients are too. When making rounds at the hospital, I have frequently heard patients tell someone on the phone, “Let me call you back, the nurse just walked in the room.” I have the utmost respect for my colleagues in nursing and do not take offense to these innocent remarks – after all, since 9 out of 10 nurses are female it is more likely that a patient will encounter a woman who is a nurse than a woman who is a doctor.

As I continue my training to become a general surgeon, I have come up with a couple of answers that I was so worried about years ago. More than halfway through my training, I can confidently say, Yes, I do have what it takes to be a surgeon. And it IS worth all the sacrifices.

Please join me on Tuesday May 13, 2014 at 8:30pm Eastern (for your local time click here) as I guest moderate the weekly #hcldr tweetchat.

This article was originally posted on the Healthcare Leadership Blog on May 7, 2014.
~~~ 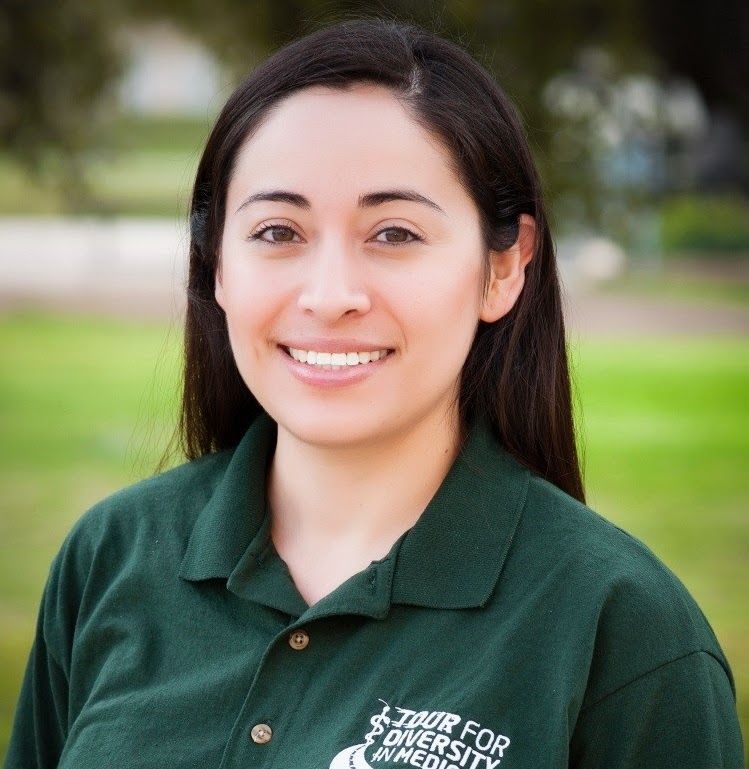 Minerva A. Romero Arenas, MD, MPH is completing a research fellowship in the Dept. of Surgical Oncology at The University of Texas MD Anderson Cancer Center in Houston, TX. She is a General Surgery Resident at Sinai Hospital of Baltimore. She received her MD and her MPH from The University of Arizona College of Medicine and the Zuckerman College of Public Health in 2009. She studied Cell Biology and French at Arizona State University as an undergraduate.

Her interests include surgical oncology & endocrinology, global health, health disparities, quality improvement, and genomics. A native of Mexico City, Mexico, Dr. Romero Arenas is passionate about recruiting the next generation of surgeons and is involved in mentoring through various organizations.

She enjoys fine arts, films, gastronomy, and sports. She enjoys jogging, swimming, and kickboxing. Most importantly, Dr. Romero Arenas treasures spending time with her family and loved ones.

One Reply to “The Changing Face of Medicine”