In a giant convention hall, blindingly bright lights shine down on a long table in the middle of a makeshift stage. A moderate-sized crowd filters in. While the majority are women, there is a mix of genders that spans generations, all coming to hear a handful of female surgeons speak. Included is a mother from the local community who brings her adolescent daughter, in the hopes of reinforcing that despite local or cultural female stereotypes, her daughter can achieve whatever she sets her mind to. The panelists come from different training and geographic backgrounds, from medical school graduates to senior attendings, general surgeons to those specializing in trauma, bariatrics, or gynecology, hailing from Bolivia to Panama to Canada. The venue is the 2015 Panamerican Trauma Congress in Santa Cruz, Bolivia. 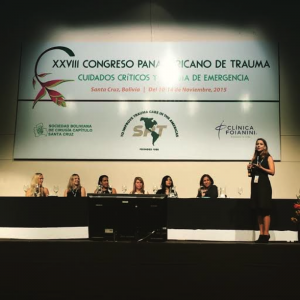 The seed for this event was planted a few years ago by Dr. Paula Ferrada, Colombian by birth and American by training, marriage, and work, who is also a trauma and critical care surgeon at Virginia Commonwealth University and chair of the Panamerican Trauma Society (PTS) Education and Research Committee. She proposed having sessions focused on women in surgery at the society’s annual congress. The tipping point for adoption came from the global #ILookLikeASurgeon social media movement started by surgery resident Heather Logghe. Through increased recognition of diversity gaps in surgery, the creation of a strong virtual social media community, local ties with the 2015 PTS congress organizing committee, and collaboration with the Association of Women Surgeons as a co-sponsor, the Women in Surgery/Mujeres Cirujanas Líderes panel was born.

Our goal was to share experiences and provide examples of success at varied levels of training from across the globe, while also trying to elucidate why proven gender gaps in medical leadership exist. We also aimed to show that appearance, be it gender, race/ethnicity, or otherwise, does not dictate what one can accomplish. The importance of the panel was confirmed even before it happened when three panelists, myself included, were invited to discuss the event on a local talk show. The segment also incorporated positive messages and insightful questions sent via Whatsapp during the live taping, and placed a correspondent on the street asking people if women can and should hold leadership positions, with most (thankfully) answering a resounding yes. 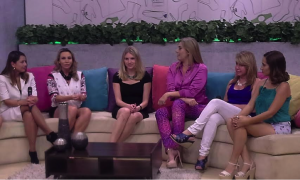 The conference panel began with us attesting to why such an event is still needed in this day and age. Most of us highlighted personal struggles and barriers that rang similarly true across generational and geographical boundaries. These challenges included patients or staff consistently perceiving us as the medical student or nurse despite being the leader of the medical team, the fight to become a surgeon while ignoring the naysayers arguing we don’t fit the stereotype, or the ability to balance a full personal life with a demanding career. When asked what we would choose if we had the option to do it all over again, not one of us said we would be anything other than what we are, a surgeon. But to be clear, there was no sugar-coating. All of us freely admitted that pursuing a career in surgery is not an easy task. However, and partly because of this, it is also one of the most rewarding professions.

Although a finite, one-hour event within a discrete, annual congress, the idea is to continue the conversation from the panel through new connections and a growing community of surgeons, women and men alike. This will dispel the notion that anyone is alone in their professional pursuits or struggles, promoting instead the idea that support to succeed exists and is accessible. The panel has already spawned a Spanish-speaking Whatsapp group between panelists and attendees from across the Americas. This has led to inspiring messages of solidarity and community, and a forum for discussion on subjects such as mentorship and patient management. All of this argues for the importance and need to foster such events at future global conferences. We also made a point to highlight the incredible power of social media, including Twitter and Facebook, to provide mentorship from afar when it may be lacking locally.

As the session came to a close, the adolescent Bolivian girl who attended with her mother promised us that she would hold fast to her professional dreams, no matter how remote they seemed. This was when we all knew the panel had hit its mark: to instill in others the courage and inspiration to chase after what they set their sights on. Because if we could do it, so could they.

For those interested in joining the trans-continental, Spanish WhatsApp group of women surgeons, please reach out to the author on Twitter @KickAsana or post in the comments section below.